The game was tied 53-53 at the end of regulation play. A-J outscored Century 14-4 in overtime to record the victory.

Jake Parr had 20 points and 8 rebounds to lead the Wildcats.

Sheldon McGrath had 13 points and 4 rebounds. Izzy Markovic had 10 points and 5 rebounds.

Jacob Zimmerman had 6 points. Michael Hill had 2 points and 4 rebounds.

A-J’s game with Sparta, which was set for Friday, Jan. 13, was rescheduled because of inclement weather. The game is rescheduled at Sparta on Tuesday, Feb. 7.

A-J, 6-10, is scheduled to play this week in the West Frankfort Mid-Winter Classic.

In the tourney, the Wildcats are scheduled to play at 8:30 p.m. Thursday, today, against Cairo. A-J played Herrin and Marion earlier in the week.

The tournament concludes Saturday, with the 4th place game scheduled at 3:30 p.m., followed by 3rd place at 5:30 p.m. and the championship at 8 p.m. 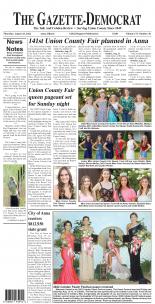