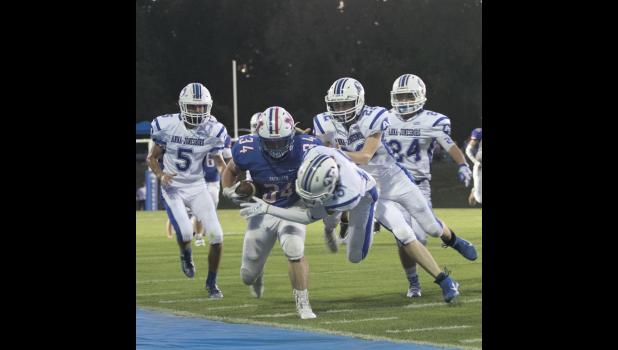 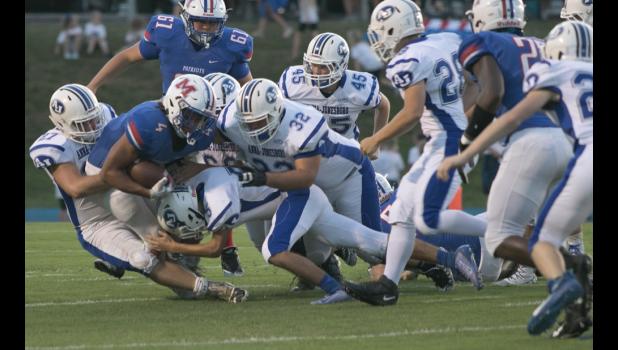 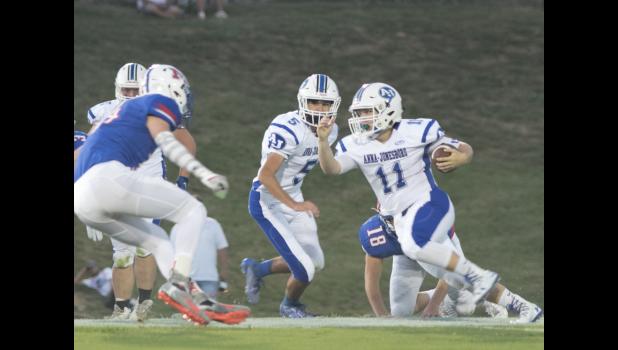 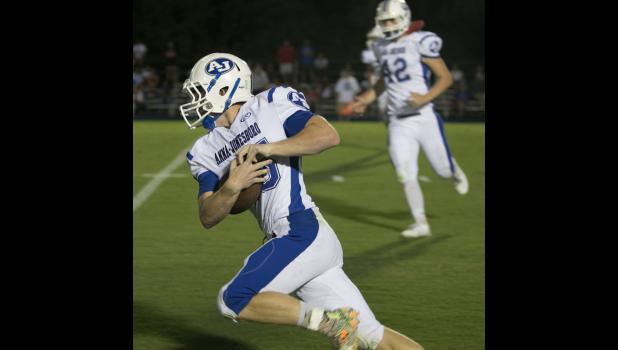 After scoring only two touchdowns in its first two games of the season the Anna-Jonesboro Community High School football team reached the endzone five times on the way to a 34-29 win over visiting Massac County at The Pit Friday night, Sept. 13.

“Overall, it was a win that we needed,” A-J coach Brett Detering said.

The Wildcats wasted little time capitalizing on a Patriot error on its first drive.

Wildcat quarterback Carson Pengress scored on a 5-yard run at the end of a 9-play drive. However, the run for the extra point failed  and A-J led 6-0 with 2:20 remaining in the opening quarter.

The Patriots came right back and David Thompson scored on an 11-yard run after a 7-play drive. Jaylon Cruz’ extra point kick put Massac County ahead 7-6 with 11:54 remaining in the second quarter.

A-J’s Baggott came back to score on a 5-yard run after a 5-play drive. The drive was built around a 48-yard pass from Pengress to Baggott.

Pengress ran in the conversion points and A-J was ahead 14-7 with 9:04 remaining in the first half.

The Patriots fumbled on their first play from scrimmage and A-J’s Drake Roach recovered the football.

Pengress scored again on a 5-yard run after a 4-play drive. Noah Treece didn’t get a chance to kick the extra point as the snap sailed over his head. A-J led 20-7 with 6:38 remaining in the first half.

After Eli Pecord recovered another Patriot fumble, A-J was on the move again.

Barry Johnson scored on a 1-yard run after a 5-play drive. Pengress passed to Noah Hobson for the conversion points and A-J led 28-7 with 3:10 remaining in the first half.

The Wildcats moved deep into Patriots’ territory and gambled on a fourth and short yardage play that was halted.

“We didn’t execute on a fourth down and gave the ball back,” Detering said. “We needed to play better defense at the end of the half.”

Neill connected then with Devin Scott for a 49-yard TD pass after a 5-play drive. Cruz’ extra point kick pulled the Patriots to 28-14 with 26.8 seconds remaining in the first half.

The Wildcats’ opening drive of the second half was lost on a fumble.

After a 92-yard drive, Thompson scored on an 8-yard run. He ran in the conversion points and the Patriots pulled to 28-22 with 1:56 left in the third quarter.

A-J came right back as Baggott scored on an 11-yard run. He was stopped on the extra point conversion run and the Wildcats led 34-22 with 7:37 remaining in the fourth quarter.

After a long pass reception, Neill connected with Scott for 40-yard TD strike. Cruz’s  extra point kick was good and Massac County closed out the scoring with 6:59 remaining in the game.

“A couple of those long pass plays should have been defended,” Detering said. “I wish we would have finished them off sooner. But it makes the game a little more exciting.”

The Wildcats’ defense went to work in the final minute. Nate Belcher sacked Neill before he was then stopped on a fourth down play with 30 seconds remaining in the game.

“The defense had to make plays then,” Detering said. “They were putting pressure on the quarterback.”

A-J took over and the Patriots had no more time outs remaining as the game ended.

The Patriots had 213 yards rushing and 110 yards passing.

Pengress, who was injured late in the game, was replaced by backup Gavin Osman.

Detering said Pengress has a hamstring injury and he would be checked by a physician this week.