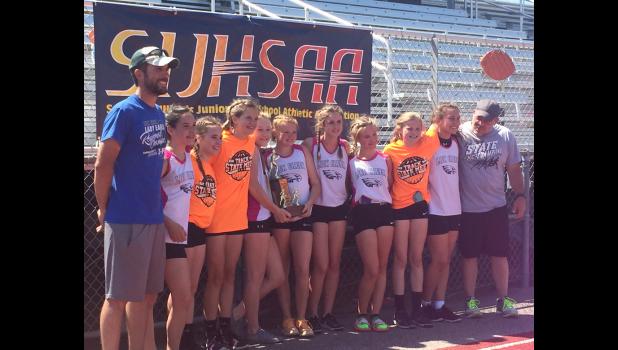 On Saturday, May 18, over 60 schools were represented in the SIJHSAA state track meet at Herrin Sports Complex.

It was a beautiful day for a track meet, maybe the best all year to this point.

The Lick Creek Lady Eagles battled all day long and ended up with a third place team trophy, in a day filled with state records falling and photo finishes the excitement was in the air.

Hannah Miller started off the day winning the long jump with a state record jump of 16’-04” on her last jump of the day.

“Before Hannah’s last jump we knew she probably had won, as her two closest competitors were finished. I looked up at her and told her to go for the state record, and she did just that,” Lick Creek coach Matt Denny stated.

“It was as exciting of a moment as anything I had experienced when he read off her distance,” Denny said. “Hannah is a true competitor, she always steps up to the challenge.”

While Miller was long jumping, Lick Creek’s only other field event competitor in Kristin Edmonds was throwing the shot.

“The events were just across the fence from each other. Hannah and Kristin were both excited about how each other were doing, and I think they both fed off of that,” Denny said.

Edmonds finished in 6th place, throwing 30’03”, which was her best for the year after being seeded 12th coming into the meet.

“Kristin worked her butt off after practice for several days to improve her shot and it really paid off,” Denny said.

Next up were the hurdles. Miranda Miller just missed placing, finishing 9th while Addison Denny came in 12th.

Denny said “This was the most competitive hurdle field I have seen at the state meet, both of our runners ran well, there were just some really fast girls this year.”

“Brodie wasn’t in the fastest heat which didn’t help her. She won her heat but wasn’t really pushed. But I told her you have to push yourself early. She is still learning how to run the 400,” Denny stated.

“These two have been our leaders for the last few years, they ran very well today, both running much faster than they had all year,” Denny said. “They will be missed on and off the track next year.”

“We had a few shaky handoffs in the 4x200, I really thought we had a chance to win that one, but in the sprint relays the handoffs are important, you have to be able to remember which one you are in because they are different,” Denny said.

With Lick Creek having some success to this point, the excitement was just beginning.

Next up was the 800m run. Brodie Denny and Kyleigh Matuszewich represented Lick Creek. Matuszewich just missed placing, finishing 9th with her best time of the year at 2:41.54.

Brodie Denny ran what was a back and forth race between three girls who had battled last fall in cross country in Grace Alongi from St. Bruno and Marie Prindiville from Immaculate Conception.

Denny led the first lap before being passed by both runners in turn one on lap two.

Denny regained the lead on the back stretch, at a pace that seemed very fast. As they came out of turn four Denny had the lead and started to kick, but Prindiville and Alongi moved beside her and passed her just before the finish line.

All three runners broke the previous state record by over a second.

“Brodie asked what were the chances that she would break the state record and get third? I said not very good, but it happens. She ran her fastest race of the year by 8 seconds running a 2:30.32,” Denny stated. “As dad I was very proud of her effort, she just doesn’t have any quit in her.”

Just two events later Lick Creek was back on the track for the final event of the day, the 1600m relay.

There was excitement before the race even started. As Lick Creek’s girls waited in the staging area, their anchor leg in Brodie Denny got sick, after running the race of her life in the 800m.

“The girls asked her are you OK? Brodie said I am now, I am ready to go, I feel better.”

The Lick Creek girls seemed focused from that point on.

“By the end of the state meet where all of our kids had run multiple events, the 1600 relay is a battle of attrition. Brodie was sick, Hannah had a hip bothering her. You have a choice at that point to step up or sit down. And our girls really stepped up,” Denny stated.

Julia Hall passed Aviston’s 3rd runner shortly into her leg and started to pull away, but St. Bruno’s Grace Alongi made up a lot of ground and Lick Creek and St. Bruno were close going into the final exchange.

Brodie Denny and Olivia Phillips from St. Bruno were stride for stride for 200 meters. Phillips took the lead at the 200 mark and it looked like she might pull away.

As they came out of turn four Phillips has about a 5m lead on Denny. Denny pulled up beside Phillips with 50m left and they crossed the finish line at almost exactly the same time.

“A mile race separated by 3 one-hundreths of a second, that was crazy,” Denny stated. “What a way to end the state track meet and an awesome year for these girls. I couldn’t be any more proud of them.”