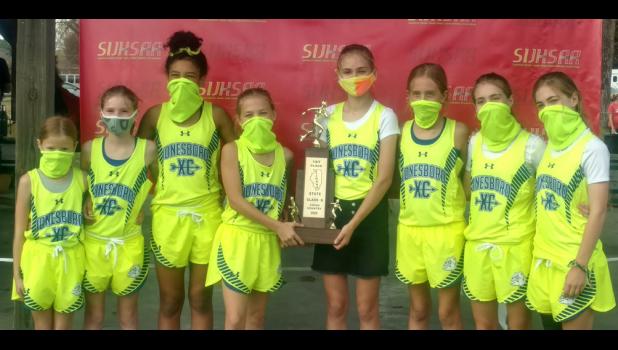 Members of the Jonesboro School Lady Bulldogs cross country team had their sights set on a state championship this year, after finishing second last year in just their first season competing in cross country.

The Lady Bulldogs finished in first place in Class S at the SIJHSAA event Oct. 23 in Du Quoin with 41 team points, ahead of second place St. Clare O’Fallon, which had 58 points. Finishing third was St. Joseph Olney with 67, followed by Pinckneyville 204 with 100 points.

To say this was a journey is an understatement. The Lady Bulldogs have been working all year long, six days a week for the most part, wanting to get to the top.

Coach Josh Staples said, “This is a very unselfish group of girls, whose work ethic is second to none. They have taken turns leading all year, and all of them were OK with that and they understood that this is a good problem to have.”

Leading the Lady Bulldogs at the state meet was 6th grader Kinley Leek. Leek finished in 8th place overall with a time of 12:24.4.

Leek has come on strong in the second half of the year, becoming much more relaxed before the races which has contributed to her success.

Next for the Lady Bulldogs was Zoe Jones. Jones, the team’s only 8th grader, finished in 12th with a time of 12:38.9. According to Staples, Jones has been the team leader of this group for the last two years, which is a very important aspect of the team’s success.

Coming in 3rd and 4th for the Lady Bulldogs were Zoe Jones twin sisters, 7th graders Raegan and Reese Jones with times of 12:51.3 and 13:12.2 respectively. They both have been solid all year for the Bulldogs. “These two bring a little attitude to the team, a little fire if you will. They kind of keep us on our toes,” the coach said.

Due to COVID restrictions, the teams were split into two heats. Miller did her job and led that group in the first heat.

Just behind Miller was 5th grader Melaina Bundren, who finished in 25th place with a time of 13:19.6. “Melaina has come a long way in her first year of cross country,  it will be fun to see how she develops.” Staples said.

Rounding out the team for Jonesboro was another 5th grader Sophia Hill. Hill came in 44th overall with a time of 13:49.9.

“Hill and Bundren gave us a cushion at the state meet, which is very important if anyone has an off day. They will be forces in the near future,” Staples said.

This championship was definitely earned by the Lady Bulldogs, and with all their runners returning but one, they will be a force again next year as they will look to repeat.

The Lady Bulldogs will travel to Chilicothe next weekend to compete in the Shzam Racing All State Championships.

Blake Abernathy competed for the Jonesboro  boys, finishing in a time of 13:19.6, which was good for a 60th place finish.