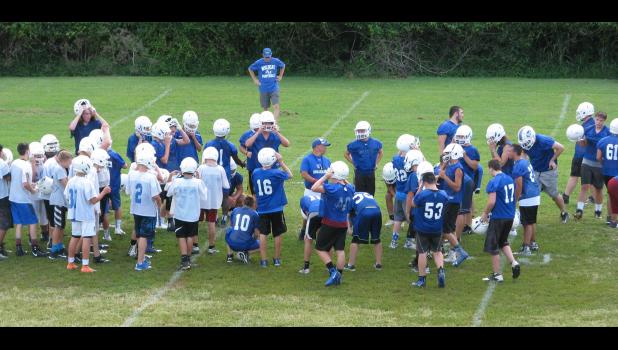 “We got ourselves back in the playoffs last year,” A-J football coach Brett Detering said. “We’d like to advance this year as far as we can.”

The  Wildcats finished with an 8-3 overall mark last season.

There are 15 seniors, 14 juniors, nine sophomores and 19 freshmen in the A-J football program as the new season draws near.

A return to the postseason for the second year in a row will be fueled around the return of five starters on offense and four on defense.

“We lost 15 seniors who were good leaders and hard workers,” Detering said.  “But we’re okay with where we’re at.”

Still, the Wildcats should be more of a grind it out on the turf rushing team.

A trio of soccer players to add to the kicking game are McGrath, who kicked extra points last season, and a pair of seniors in Jaryt Tripp, 5-11, 160 pounds, possibly on kickoffs, and Zach Massey, 6-1, 180 pounds, who should add to the punting game.

On the defensive side, Osman, McGrath and Hart will double as defensive backs. Turner is a linebacker.

Senior Drake Pyle, 5-9, 215 pounds could be on the defensive line as well.

Several offensive linemen also are expected to play on the defensive side of the ball.

“We have decent numbers,” Detering said. “We have a number of guys very capable.”

An addition to the team this year is a transfer player from Louisiana, senior Zack Pinter, 5-8, 175 pounds, a running back-linebacker.

Detering looks for Du Quoin and Carterville to be the top teams again in the Southern Illinois River-to-River Conference Mississippi Division race this season.

“Hopefully, we are right there with them,” Detering said.