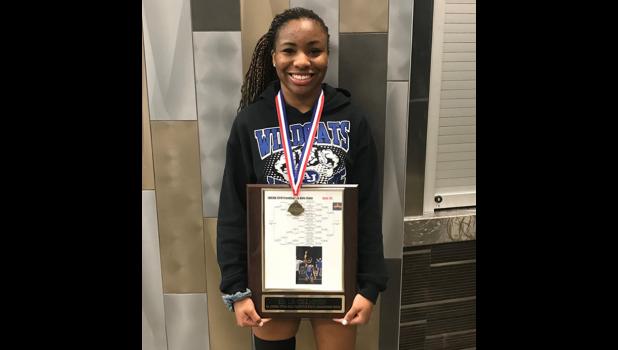 Hart defeated Leyden High School’s Samantha Javier with a pin in 1:58 to win the state championship.

In the first round, Hart defeated Maine East’s Hannah Suboni-Kaufman with a pin in 4:08.

In the quarterfinals she defeated Metamora Township’s Cera Jones by an 11-1 decision.

In the semifinals she defeated Taft’s Kaila Del Toro by a 13-2 decision.

“She wrestled four girls, all with different techniques,” A-J coach Chase Hargrave said. “Her second match was probably her hardest. But she won the whole thing and it wasn’t even close.”

Hargrave is an assistant wrestling coach at A-JCHS.

Hargrave said she won All-American honors last year in the freestyle wrestling in the 106-pound class.

“She has a possibility of being a team leader next season” for the Wildcat wrestling team, Hargrave said. “I look for her to have a good high school career.”