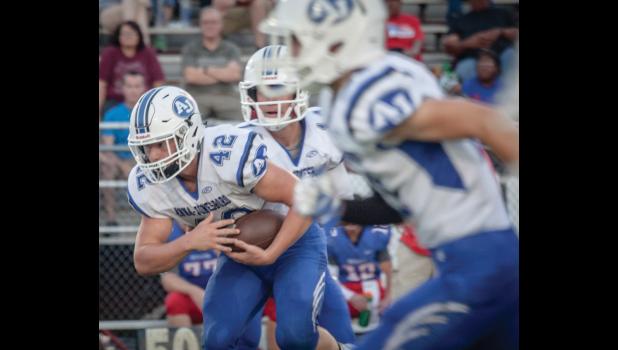 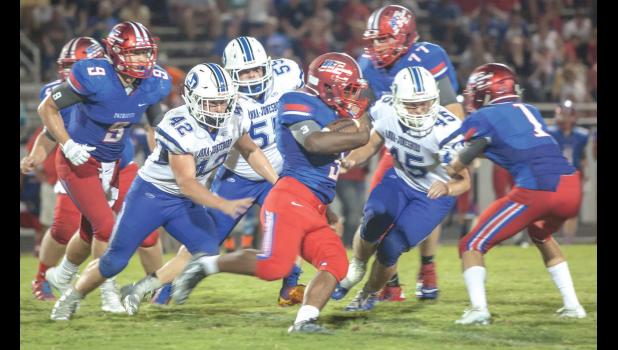 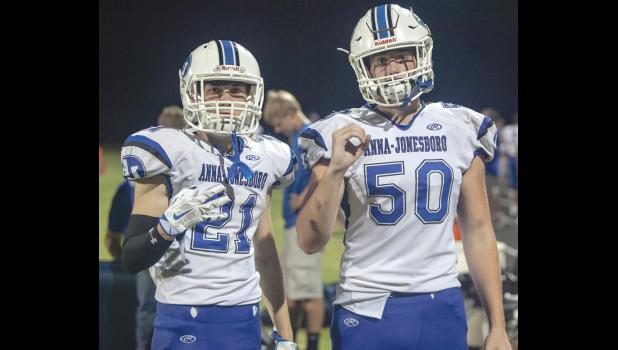 The Wildcats scored on their opening drive on the  way to a 34-7 win in the game. A-J improved to 3-0 on the season.

With fullback Jayce Turner doing most of the running on the opening drive, Dylan Fox capped the 12-play drive with a 6-yard touchdown run.

A pass was incomplete for the extra point and A-J took a 6-0 lead with 4:18 remaining in the quarter.

The Patriots were forced to punt on their first possession and the Wildcats offense was on the roll again.

After a 7-play drive, A-J quarterback Bryce Osman scored on an 11-yard run. Fox scored on the extra point run and A-J was ahead 14-0 with 11:56 remaining in the first half.

On the Patriots next drive, quarterback Micah Skidmore was sacked for a 10-yard loss by Keaton Busby and Trenton Turner and then the drive ended on a fourth down when Caleb Clover knocked down Skidmore’s pass.

The Wildcats took over and were driving again in the second quarter when the Patriots intercepted an Osman pass.

Three plays later, Skidmore connected with Darian Roundtree on a 25-yard pass in the endzone.

However, Roundtree fumbled the football and  teammate Evan Hughes recovered the ball for the score.

The extra point kick was good and Massac County pulled to 14-7 with 15 seconds remaining in the first half.

“At the half, we challenged our kids to be more physical and wear them down,” Detering said. “They responded after the half. They ended up scoring on the first drive.”

After another lengthy drive, Jayce Turner scored on a 2-yard run to cap a 14-play drive. He then ran in the conversion points to boost the Wildcats to a 22-7 advantage with 4:59 remaining in the third quarter.

After a Patriot punt, the Wildcats were on the move again.

After a five play drive, Jayce Turner scored on a 5-yard run. The extra point pass was incomplete and A-J was ahead 28-7 with 1:01 remaining in the third quarter.

After Trenton Turner and Nick Harvel sacked quarterback Skidmore for 10 yards, his pass was intercepted by A-J’s Arieh Hart to set up the Wildcats final score.

Nine plays later, Jayce Turner scored on a 24-yard run. Osman kicked  the extra point. However, A-J was flagged for having too many players on the field and Osman missed the next attempt and closed out the scoring with 3:48 remaining in the game.

The Patriots’ final drive moved deep into Wildcat territory and was thwarted when they fumbled the ball.

“I thought the offensive line did a nice job,” Detering noted.

The Wildcats, who never punted in the game, rushed for 310 yards in 54 carries.

Osman completed 1 of 5 passes for 8 yards with an interception.

“We’re not a strong passing team,” Detering said. “Our play action passes need to become more proficient. We need to make big plays and execute and take some pressure off Jayce, who was carrying the load.

But Osman did another good job of reading the option and executing.”

The Patriots’ offense was held to 65 yards rushing and added 121 yards passing.

“Even though we played pretty well, we made a few mistakes in the game,” Detering said. “Those mistakes could be the difference in a close game.”