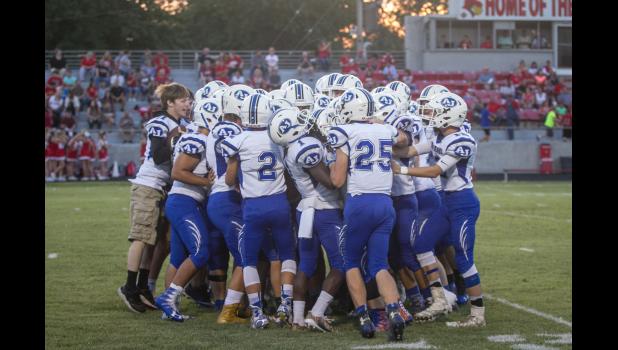 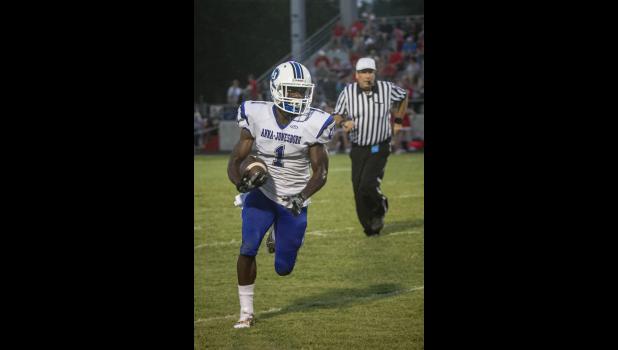 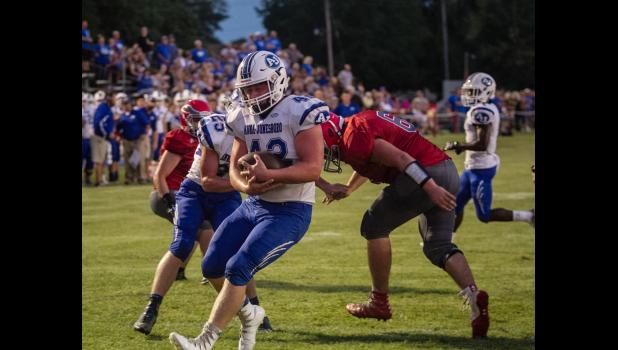 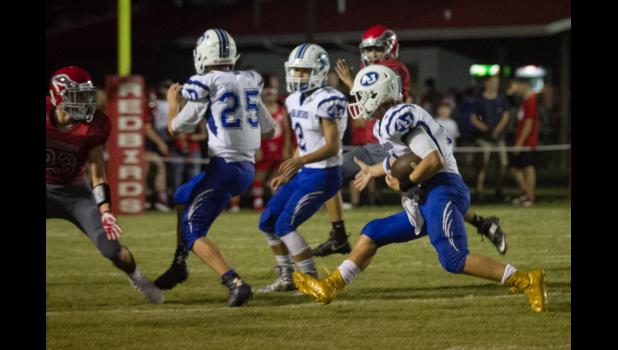 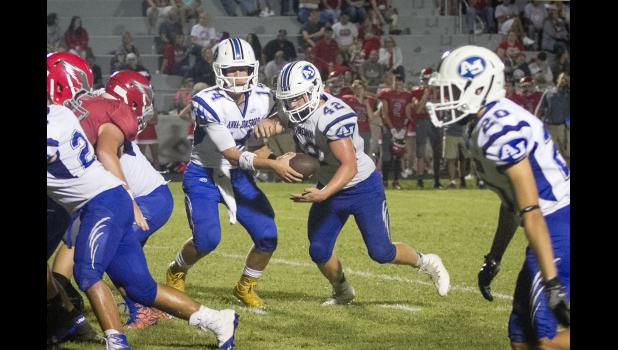 The visiting Anna-Jonesboro Community High School football team took advantage of early West Frankfort miscues on its way to a 43-18 win in the 2017 season opener  for both teams Friday, Aug. 25.

“That was a nice win,” A-J head coach Brett Detering said. “I was really pleased with how we played. They made some mistakes. But I believe our kids were creating a lot of those.”

The Wildcats wasted little time getting on the scoreboard after a Redbird miscue.

Nine plays later, Jayce Turner scored on a 2-yard run. Sheldon McGrath kicked the extra point and A-J was ahead 7-0 with 5:68 remaining in the first quarter.

“It was good to get our rushing game going early,” Detering said. “It gave them a lot of confidence.”

A-J’s Ariel Hart thwarted the Redbird’s ensuing drive when he stripped the football out of running back Madison Allen’s hands in the end zone for a touchback.

For the first and only time in the game, A-J was stalled on its next drive and was forced to punt.

After A-J was offsides on the first play from scrimmage, the Redbirds’ Allen fumbled on the next play and the Wildcats’ Turner recovered.

Hart made a nifty kickoff return on the next drive to set up A-J’s next TD.

Four plays later, Turner scored on a 2-yard plunge. McGrath’s kick was off and A-J led 20-0 with 6:57 remaining in the first half.

The Redbirds’ Allen then capped a five-play drive with what appeared to be a  49-yard TD run that was negated because of a personal foul call.

Osman capped a seven-play drive with a 5-yard TD run. Hart ran in the conversion points and A-J was in front 28-0 with 1:50 remaining in the first half.

But the first half was far from over.

Kyle Hammers then scampered 90 yards on the kickoff return for a Redbird TD. The extra point kick was blocked and West Frankfort had pulled to 28-6 with 1:00 remaining in the first half.

The kickoff return was fumbled and the Redbirds took over deep in A-J territory.

Quarterback Eaton then capped a six-play drive with a 15-yard TD pass to Hammers. The conversion run was halted and West Frankfort pulled to 28-12 with 23 seconds remaining in the first half.

“I saw the game film and we made some mistakes,” Detering said. “Busted coverage and things like that are some things we need to work on.”

The Wildcats continued to roll in the second half.

On an option pass, Jerolds threw to Chrisp for a 25-yard TD pass to cap a 10-play drive.

Turner ran in the conversion points and A-J led 36-12 with 7:36 remaining in the third quarter.

But, the drive stalled on another intercepted pass by Jerolds and A-J’s offense went to work again.

Turner then capped a 10-play drive with a 3-yard touchdown run.

Jaryt Tripp kicked the conversion points and A-J led 43-12 with 8:00 remaining in the game.

West Frankfort’s Allen closed out the scoring with 2:30 remaining in the game when he scored on a 5-yard run. The extra point kick was blocked to close out the scoring.

Reserve quarterback Jerolds took a knee twice in the final seconds to end the game.

“I was pleased overall,” Detering said. “I felt like we made some improvements from last year. We played even better.”

This was Detering’s 13th consecutive win over West Frankfort.