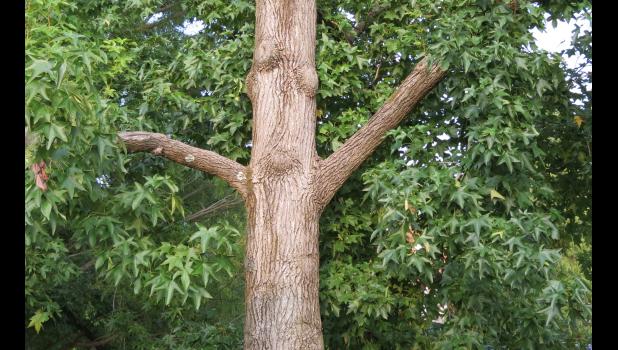 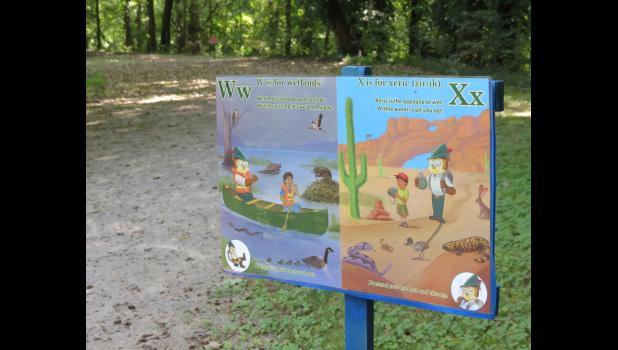 Once again, this week’s word adventure began when your writer went on a walk...or two...

Let’s start with our word for the week, which, as the caption under one of the photographs declares, is “xeric. Xeric, it seems, is a word which means the opposite of wet.

I’ll be honest with you. Until last Thursday morning, I was not familiar with the word “xeric.” By not familiar, I mean I had never heard of it.

“Xeric” was one of the word’s featured on a sign which was displayed as part of a special event at the Lincoln Memorial Picnic Grounds in Jonesboro. You may recall that I am a frequent visitor to the little gem of a park in Jonesboro.

The sign was part of a “Woodsy’s ABCs” self-guided story book trail, which was on display Sept. 17-20 at the picnic grounds. The trail featured signs which, in turn, highlighted a letter, word and rhyming verse.

The story book trail was on display in honor of Woodsy Owl’s 49th birthday. He looks pretty good for a middle-aged owl.

By the way, the rhyming verse with the word “xeric” read “Xeric is the opposite of wet. A little water is all you get.” I’m just guessing, but I suppose whoever wrote the verse was grateful that she didn’t have to come up with a word to rhyme with “xeric.”

Since “xeric” was a new word to yours truly, I thought I would do some research and, perhaps, learn a little bit more about it.

My intense research, which lasted all of about two minutes, according to the cheap watch on my wrist, also turned up the following little gem related to “xeric”:

“Xeric’s talisman is an amulet that was once owned by Xeric, a tyrannical ruler who reigned over Great Kourend during the Age of Strife nearly 1,030 years ago. It is obtained as a rare drop from killing lizardmen, brutes and shamans. It can also be obtained by stealing from stone chests in the Lizardman Temple beneath Molch, albeit at a slightly rarer rate.

“Upon obtaining the talisman, it is inert and uncharged. By charging the talisman with lizardman fangs (costing 22 coins per charge), the talisman becomes able to teleport players to various locations throughout Great Kourend. Each fang provides one charge for the talisman, holding a maximum of 1,000 charges. The charges can be removed whenever a player wishes to do so by selecting the Uncharge option on the charged talisman. This will revert the amulet back to a Xeric’s talisman (inert).”

To be honest with you, I have no idea what anything in the preceding two paragraphs means. Guess that makes me an old guy. Which I am.

We’ll branch out a little bit with a few words about trees. Get it...branch out...trees...sorry...

On another one of my walkabouts, I happened to notice a sweet gum tree looking at me. Well, it looked like it was looking at me. Check out the photograph of the tree, and make of it what you will. Or won’t.

The possibility of seeing a face in a sweet gum tree led your writer’s simple mind to ponder some special trees which show up in “The Wizard of Oz” and “The Lord of the Rings.”

“The Wizard of Oz” features “Fighting Trees.” Flying monkeys also are featured in the story about the wizard in the Emerald City. I have not seen any flying monkeys while out on a walk. Not yet, anyway.

Further research on the internet showed that the “Fighting Trees” “can only be found in the magical Land of Oz and are located on the border of Oz’s southern quadrant known as the Quadling Country.” I have not gone on a walk in the Quadling Country yet. I think it might be near the Kaolin clay pit, which is not far from Cobden.

The trees that show up in “The Lord of the Rings” are called “ents,” which, as you probably know, are “ also known as Onodrim (Tree-host) by the Elves, were a very old race of Middle-earth. They were apparently created at the behest of Yavanna after she learned of Aulë’s children, the dwarves, knowing that they would want to fell trees.” (This information about “ents” also came from the internet. Like everything else in this column which came from the internet, it has to be true.”)

All of this information about trees got me to wondering if there might have been an “ent” in “The Wizard of Oz.” Seems like Dorothy kept mentioning her “Enty Em.” Oh, wait, that was “Auntie Em.” I think.

I think we should wrap this up for another week. I’m going to head out to Quadling Country and look for some flying monkeys...