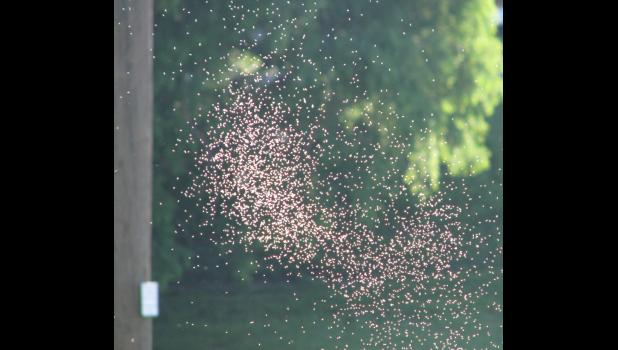 A fellow traveler on the Journey Through Life mentioned to me one day last week that recent columns didn’t seem to involve much writing.

The traveler was correct. Your writer has been using more photographs lately, mainly because your writer liked the photographs, and thought a few other folks might like them, too.

Turns out there are a few other people out there, and the emphasis seems to be on the word “few,” who like to see pictures of snakes hanging on window frames and goofy gooses wandering across country roads. So, we’ll probably keep on using such pics. That’s why you get to see the picture this week of tiny winged creatures buzzing around.

However, in the interest in generating a few more paragraphs for your reading pleasure, I decided that this week would be a good time to start on my memoirs. Well, maybe not so much memoirs as memories. For the past week. Just ‘cause lots of things happened.

Someday, perhaps, yours truly will indeed do something that amounts to a memoir. However, once I do that, I will have to move. So many, many special memories, you see. And I have all the notes...

In the meantime, we’re going to have to make do with a week’s worth of a memoir. A week seems like it will be just about the right amount of stuff to fill up some space.

It was the best of times. It was the worst of times. Oops. Somebody already used those sentences. They do kind of sum up the way life goes, sometimes, even without a revolution to worry about.

Last Wednesday, had a nice chat with another fellow traveler on the Journey Through Life about dandelions.

Some folks don’t like to have dandelions in their yards. Not a one. They will go to great lengths to eradicate dandelions.

While dandelions generally are viewed as a plant, I’m thinking they really are animals of some sort, and night creatures, too. At night, when everyone is asleep, dandelions will creep into the yards of folks who work hard to get rid of them. Alas, to no avail. No matter how hard they try, the dandelions keep coming back.

That’s why we don’t worry much about having dandelions in our yard. The Other Half likes to put them in salads, too. So, maybe they really are plants after all.

Thursday. Spent a lot of time in the warm, no make that hot, June sunshine today. Found some fossils in a very unexpected place, too. One never knows about such things.

Thursday night, watched an ice hockey game. After all, nothing says ice hockey like June and temperatures in the 90s, or maybe even 100 degrees, which might have been the temperature in Las Vegas, Nevada, where this particular game was being played.

The game involved something called the Vegas Golden Knights and the Washington Capitals. If the Capitals won the game, they would claim their first Stanley Cup championship.

I think that there might have been a total of three persons in Union County who actually watched the game. The Other Half was in the room where I watching the game. She did not care.

Well, Washington won the game. And the Stanley Cup. With the win, Washington already has one more Stanley Cup in its trophy case than my favorite team, the St. Louis Blues, have brought home. Ever. In 50 or so years.

Last Thursday night’s game, by the way, was played in a hockey hot bed, in the Nevada desert, by a team which has a rich tradition that dates back all the way to, oh, last October or so. Let’s see. The Blues have been around for 50 or so years. Oh, I already mentioned that.

Friday. One of the highlights of the day was walking through downtown Anna when the temperature was 98 degrees. At 5:30 in the evening. Perfect hockey weather.

One of the other highlights of the day was seeing Chuck, my favorite groundhog, again. Chuck had sense enough to come out a little later in the evening, when it was at least a bit cooler. That makes sense, since Chuck is wearing a fur coat all of the time. I just wish he would stay away from the road.

Saturday. Today’s memoir memory involves being on the receiving end of a scattered thunderstorm. And rain. Lots and lots and lots of rain.

The downpour didn’t really last for very long, just long enough to get yours truly pretty wet. It wasn’t all that bad, though, ‘cause I think there was only a 30 percent chance of rain at the time, so I was only 30 percent wet.

I did learn, though, that one of those reusable bags you take to the grocery store also can serve as rain gear, if needed. Well, sort of.

Or, at least trimmed. You see, our lawn mower has been out of commission for a couple of weeks. The grass, and the weeds, especially the weeds, have kept on growing.

We do not have a lot of grass to mow, mainly because The Other Half has turned a good portion of our yard into an agricultural production region.

Since we don’t have a lot of space to mow, I figured I would try using our new weed, um, grass, trimmer. It worked, and it didn’t take all that long.

Well, that’s pretty much it for this week. Typing all of these words have given my fingers cramps. Oh, I did go to a book sale last Friday evening at Stinson Memorial Library in Anna. Didn’t find any memoirs, though.