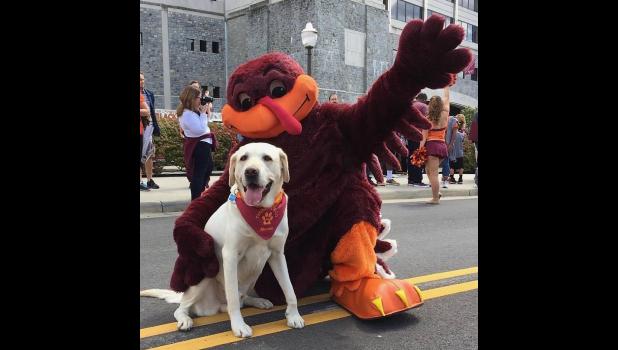 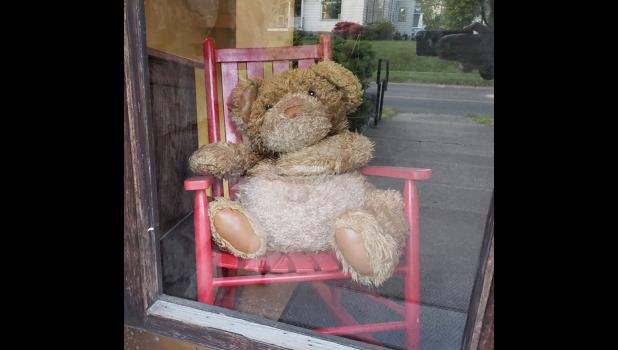 It would be kind of tough these days to not have any friends. That’s why I visited with Bearnard one day last week.

We’ll get back to Bearnard in just a bit...if you’ll bear with me, I wanted to share a “feel good” story I ran across one day recently on the internet. Once, since it was on the internet, it has to be true.

Anyway, the story is about Moose...Moose is not a moose...Moose is a dog...and now Moose is Dr. Moose...but you can read the story, which was posted on the Virginia Tech website:

May 15, 2020 – A Virginia Tech staffer who has spent a career serving and supporting the university community will be recognized today in a special commencement ceremony.

He’s also sure to receive plenty of treats and a hearty “Good boy!”

Like the Hokies he helps, Moose has had a challenging few months. Just a week after his birthday in February (his 64th, in human years), the Labrador Retriever was diagnosed with prostate cancer and began a treatment regimen of radiation, chemotherapy, and other therapies.

His treatment has been managed by providers at the Virginia-Maryland College of Veterinary Medicine, a joint venture of Virginia Tech and the University of Maryland at College Park. Moose was cared for and housed by a Virginia Tech veterinary student earlier this year while receiving radiation treatments at a private veterinary specialist in Richmond.

Moose, who came to Virginia Tech in 2014, is now one of four dogs at the counseling center who serve as working therapy animals and ambassadors for mental health awareness.

Trent Davis, the coordinator of animal-assisted therapy and a counselor at the center, credited Veterinary Teaching Hospital staff for providing Moose with excellent care. Moose continues to receive chemotherapy and has been given a pawsitive prognosis.

Moose has returned to work with canine colleague Derek, who is also owned and cared for by Davis. Virginia Tech’s team of therapy dogs is rounded out by Carson and Wagner, whose humans are also staff members at the counseling center.

Moose has aided in more than 7,500 counseling sessions and over 500 outreach events in his six years at Virginia Tech. He was honored in 2019 with the Virginia Veterinary Medical Association’s Animal Hero Award. When not working, he enjoys swimming, playing tug of war, and perhaps most of all, eating.

(You may be wondering why I’m sharing a story about a dog and a HokieBird from a place far, far away...well, I just figure we could use something “upbeat” these days.)

Maybe I should have asked Bearnard when I stopped by one day last week to visit him at Stinson Memorial Library in Anna.

As you may recall, I am a frequent visitor to the Anna library. The library, however, has been closed for some time due to this pandemic thing that has been going around.

Bearnard is a big teddy bear who is spending his time in quarantine stationed at the front door at Stinson. A message about Bearnard had been posted on the library’s Facebook page about a month ago. The message read, in part: “Without any friends in the library, Bearnard is feeling lonely! Stop by the front doors to wave hello...”

I didn’t want Bearnard to feel lonely, so I stopped by...waved...and said hello...

...later, I read the rest of Bearnard’s message, which shared that if you stop by, and the weather happened to be nice, “he would love to hear a story!”

Wellll...I figured that Bearnard wouldn’t want me to read him “War and Peace,” so I found something shorter. Once again, I did some extensive research online (I wasted my time on Google) and found some six-word stories. Perfect.

I jotted down one of the six-word stories on a piece of paper, with an old-fashioned pencil, and went back to the library.

Here’s the six-word story story I shared with Bearnard: “Cupcakes were always the answer. Always.”

And now, for a weekly supply of bad jokes, which were found out in our backyard (actually they are from bestlifeonline.com and a website featuring the “Best Dad Jokes”):

Thursday: Why did the grizzly hate this article? He can’t bear puns!

Friday: “Why did the scarecrow win an award? Because he was outstanding in his field.”

Saturday: “I made a pencil with two erasers. It was pointless.”

Sunday: “I’m reading a book about anti-gravity. It’s impossible to put down!”

Monday: “Did you hear about the guy who invented the knock-knock joke? He won the ‘no-bell’ prize.”

Tuesday: “I’ve got a great joke about construction, but I’m still working on it.”

Wednesday: “I decided to sell my vacuum cleaner—it was just gathering dust!”