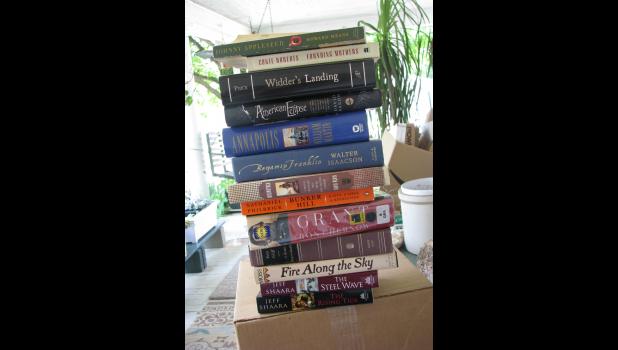 Way too many books, and not enough time...

The cats and I have been spending some special time together this week. The four of us look forward to such occasions...

Lately, I’ve been making my way through “Grant,” a biography written by author Ron Chernow. The author also has written a biography of George Washington and another fellow named Alexander Hamilton. I’ve read both of the biographies. Never would have dreamed that the Hamilton biography would become the Hamilton musical. And yet it did.

“Grant” is one heavy book. A very heavy book. Really. I’ve had to take care while reading “Grant” in the evening, ‘cause if I drop the book while I’m falling asleep, I could get hurt.

Actually, the biography has been a great read. The title, “Grant,” just “Grant,” with no subtitles, might say a lot about a man who faced life’s challenges and struggles, became the Union Army general who, at least in the simple little mind of yours truly, was responsible for winning the Civil War, and served as president of the United States.

It may be overstating the man’s life, but he seems to have been the kind of leader (at least as a general) who just did what needed to be done. He didn’t brag about what was accomplished. I’m guessing he wouldn’t do well in today’s frenzied media environment.

If you are interested in reading “Grant” (and I would recommend doing so), you can check it out at Stinson Memorial Library in Anna.

Be forewarned, though: as noted, “Grant” is one heavy book. That’s because it’s about 50,000 pages long. And that’s been a bit of a challenge for your writer. That’s because while I’ve been reading “Grant,” I’ve found other books that look interesting. Lots of other books. Too many books.

To make matters worse, another book sale is coming up at the aforementioned Stinson Memorial Library. When it comes to book sales, yours truly is kind of like a moth drawn to a flame. And we all know how that turns out.

By the way...about the stack of books in the photograph: one of the books signed by the author is titled “Widder’s Landing,” which was written by Eddie Price. The book is a work of historical fiction, set in Kentucky in the early 1800s. Reading well-written historical fiction is one of my favorite ways to spend time taking a nap out on our front porch on a warm summer day.

Yours truly had an opportunity to meet the author of “Widder’s Landing” a few years ago at the Fort Massac Encampment. The encampment is held during October at Fort Massac State Park in Metropolis. The Other Half and yours truly enjoy paying a visit to the encampment...it’s kind of like doing a little bit of time travel, but you still have to come back to the present.

The other book signed by the author is titled “American Eclipse: A Nation’s Epic Race to Catch the Shadow of the Moon and Win the Glory of the World.” The author is David Baron.

Yours truly had an opportunity to meet the author last year when he paid a visit to the General John A. Logan Museum in Murphysboro.

Baron came to Southern Illinois a couple of months before the big solar eclipse which happened last August. He spoke to a full house at the museum.

His book is about another solar eclipse, one which happened in 1878, long, long before the internet, cell phones and around-the-clock excitement which is generated by the 10,000 channels we can watch on television.

I suppose it would have made sense to read the book about the eclipse last year, when the whole solar eclipse thing was a topic of discussion throughout the universe. I started to read the book, and, once again, found other books to read...and then some others...and then...

I guess the good thing is that I’ve plenty to time to read “American Eclipse,” ‘cause there’s another total solar eclipse coming...in 2024, I think. Maybe I’ll be finished with “Grant” by then. Keep reading, folks. Keep reading.