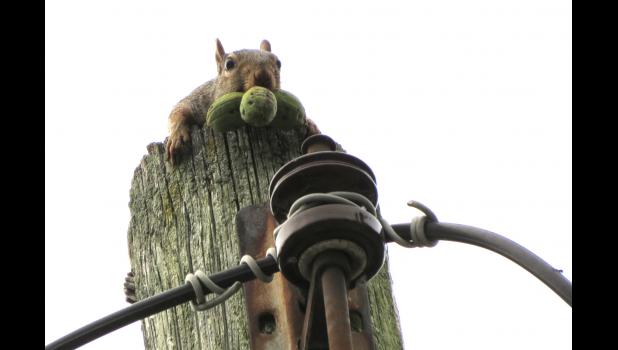 Thank goodness there are squirrels...

To tell you the truth, your writer was a bit concerned about how things would go this week, at least when it came to crafting yet another not-an-award-winning column.

That’s why I am so grateful for squirrels...and a special event which unfolded over the weekend.

Squirrels, as you know, are cute and fluffy and occasionally a bit on the goofy side. And they can always be counted on for a good picture.

That’s why you are getting to see the liddle buddy who was spotted one evening last week hanging out atop a utility pole...with what appeared to be more than a mouthful of treats.

The squirrel’s picture is filling up a whole bunch of space because yours truly was feeling a bit under the weather during the past week.

Creativity was in short supply, unlike whatever it was in my head that made it feel like 12 pairs of dirty socks had been stuffed into my sinuses.

For the most part, I wanted to sleep. Typing didn’t seem like a bright idea. Too many chances for mistakes.

Truth be told, this was my second round of sinus stuff since August.

Maybe the extremely dry, 90-degree weather during the final days of September was to blame.

Fortunately things seemed to get better over the weekend.

(The Other Half might beg to differ. She seemed to be embarking on her own little adventure which involved an unpleasant sinus experience.)

On a happier note..for some folks, anyway. The balance of the universe was restored last Sunday afternoon in St. Louis.

The Cardinals are scheduled to begin playing October baseball this week.

The Cardinals’ return to baseball’s postseason comes only a few months after the St. Louis Blues won the Stanley Cup. Their first Stanley Cup. Ever.