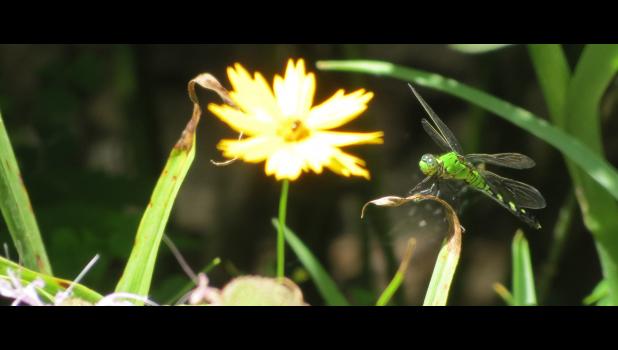 Spending some time with flowers, dragonflies...

After a couple of rather frustrating, but not totally expected, experiences involving a major bureaucracy, a brisk walk in the company of trees, flowers, birds, dragonflies and fish seemed like a good thing to do.

Without going into all of the gruesome details, let me just say that bureaucracies continue to be quite good at being bureaucratic. And, it would seem that the bigger the bureaucracy, the more frustrating the whole experience can be.

Round one of my bureaucratic adventures began one evening last week and involved some time on that wonderful resource which we call the internet.

In order to take care of some business which needed to be done as part of the Journey Through Life, yours truly needed to create an online account with a big bureaucracy, which shall remain unnamed.

Now, I’ll be the first to admit that I am not as familiar with some forms of 21st century technology as I should be. However, in spite of some of the thoughts which have been expressed in this space over the years, I am not a Luddite*.

For the record, I’ve had to set up a fair number of online accounts which required the creation of “usernames.” Perhaps you are familiar with such things. When you create a username, it is suggested that you be, well, creative, because there are probably Russians out there who want to know how you spend your Saturday mornings online. So, I created a username which seemed to be rather unique.

The adventure also required the creation of a password for the account. As has been the case with usernames, I have created a fair number of passwords, again with sneaky Russians in mind.

The bureaucracy which needed the account was quite happy with my password. However, the username seemed to cause bureaucratic confusion. No reason was given. After multiple, frustrating attempts to resolve the situation, I threw my laptop out in the street, where it was immediately run over by a large truck with loud, diesel engine.**

The Other Half assured me that such experiences are to be expected with large, and likely mind-numbing, bureaucracies. She is quite good about dealing with bureauracies.  Take a deep breath, she said, and come back to it tomorrow. Oh, and go get your laptop out of the street, she suggested.

By that time, I had already decided that I would continue my adventure with the bureaucracy the next day. This time, the adventure would involve a telephone, dialing a number which had been provided by the bureaucracy and talking to a real, live human being. Perhaps, if I happened to be lucky, the human being would even be on the same continent.

Next day, during my lunch break, I dialed the number. Got straight through. To what I assume was a recorded message which was repeated hundreds, perhaps, thousands of times a day.

The recorded voice on the other end asked me some questions, and then suggested that I was caller number 537,469 and that I would probably get to wait for about 40 minutes until an “agent” happened to be available. I knew it. Russians again. Why else would I be talking to an agent.

Periodically, the voice would come back on the line. Several times, I was thanked for my patience. The voice also suggested that I could do what I needed online, in the comfort of my home or office. This, I already knew. The voice, however, did not offer to explain why the bureaucracy he represented did not like my proposed username. Or, what he was going to do to fix it.

I ended up waiting for about half an hour before a friendly, female voice came on the line and asked if she could help me. (While I was waiting, I attempted to figure out what to do with my laptop which had been run over by a truck.)

I explained to the nice person on the phone what I needed to do.

“I’m sorry. We don’t do that on the phone,” she informed me.

Never mind that the information posted online by the bureaucracy suggested that what I needed to do could actually be done by talking to someone on the phone.

Well, in keeping with advice The Other Half had shared with me, I remained calm. I stood up, walked out on our front porch, and calmly threw our telephone out in the street, where it was run over by, you guessed it, a big truck.

About an hour later, I was out walking in the summer sunshine, under a bright blue, cloudless sky. A canopy of trees was overhead. Critters were doing their thing on a summer afternoon. Life was good.

By the way, before the phone met its end, I was given an appointment which, if I understood correctly, will involve genuine, face-to-face contact with another human being. The Other Half will be going with me. To keep me calm.

(*Look it up. You can find it online, if you haven’t thrown your laptop out in the street. A search on Google showed about 2,150,000 results.)

(**I made this up. The truck did not have a diesel engine.)