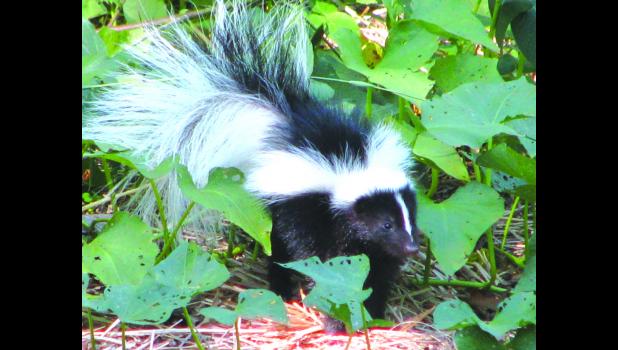 Before we get to the good stuff this week, allow me to share a special moment of living in rural America which we experienced last Sunday evening...

Yours truly was busy doing something important on the computer. Unexpectedly, a familiar, and unpleasant aroma, filtered through our humble abode.

Apparently, something, or someone, had made a skunk very unhappy in our neighborhood. The critter responded by unleashing a rather stinky smell in the hot and humid July air.

We were fortunate, I suppose, that the aroma seemed to dissipate rather quickly. But it made for an interesting interlude on an otherwise routine Sunday evening in July...

The questions arose when I opened a package of Swiss cheese over the weekend. The package clearly identified the product inside as Swiss cheese. Yet, none of the eight or nine slices of cheese in the package had holes in them. Not a single hole. This Swiss cheese was wholly un-holey.

Pondering the idea of “old-fashioned” surfaced thanks to an item which arrived by way of email from the fine folks who are involved in the Union County CEO program.

(Email, of course, doesn’t seem all that “old-fashioned.” Well, in my mind. ‘Cause email already is considered an old-school form of communication in some circles.)

The CEO program helps to prepare Union County high school students for life in the real world. (That vastly oversimplifies the program.)

The folks involved with the program shared an email in early June which highlighted “40 Old-Fashioned Skills That Kids Need To Know Today!”

The 40 “old-fashioned skills” are wide ranging and, yes, they are indeed, in some ways, “old-fashioned” in a world which seems to value immediate gratification, which is immediately followed by tossing whatever was gratifying in the trash. Whew, that was way too philosophical.

Anyway, let’s take a look at some of those “old-fashioned” skills.

How to sew on a button. Can do. And it’s not as easy as you might think. And those sewing needles are really sharp.

How to make a genuine apology. Yup. Everyone needs to learn this one.

How to hammer a nail. As has been noted many times in this space, tools are not this writer’s best friends.

How to shake hands. An uncle was my teacher for this one. He had a very, very firm handshake. He expected everyone to have the same skill. Lesson was learned.

How to take notice of needs around you. It drives me crazy to see folks simply walk by, or walk away from, a problem which is right in front of them.

How to make scrambled eggs. Yup. When yours truly was a kid, a long time ago, he was informed that if you are hungry, there are fresh eggs in the refrigerator and pans in the kitchen. Learn how to use ‘em.

How to do laundry. Did you know that you can’t bleach when you wash your favorite bluejeans?

How to take care of a garden. Well, sort of. The Other Half is the artist in our family when it comes to gardening. I do, however, grow peppers.

How to read a map. This one brought to mind some folks who were depending on 21st century technology for technology and ended up in a mud hole somewhere out in the middle of nowhere because that was where the voice told them to go.

How to find a book in the library. No problem with this one. The problem is that there are simply too many books.

How to care for a pet. Ask Bob, our cat, about this one. Personally, I think we have come to a mutually acceptable spirit of existence.

How to admit a mistake. See “how to make a genuine apology.”

How to set the table. Thank goodness for the film “Titanic” and the lesson it had about silverware.

How to iron a shirt. Know how to do this. Prefer to acquire “wrinkle free” shirts.

How to wash dishes. Long ago, The Other Half and yours truly made a “deal” about doing the dishes and a chore which comes with having little ones. The chore involved in her part of the bargain went away when the last diaper was washed. I am still doing the dishes. Further proof that life can be unfair.

How to be KIND! Saving the best for last.