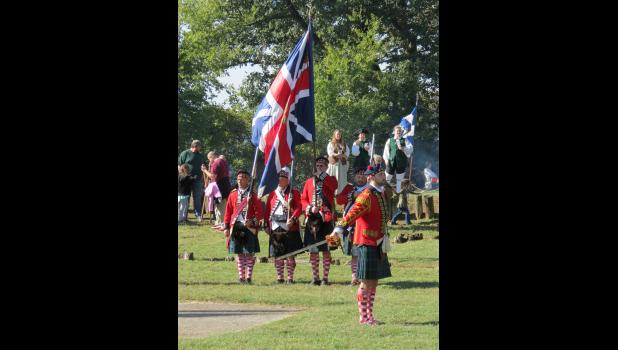 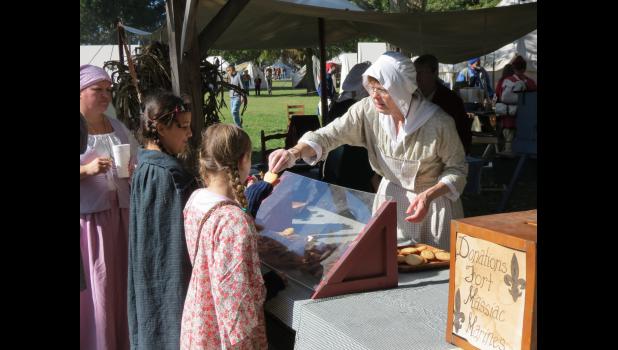 Last Saturday was one of those days which you wish could have stretched on...for at least a few more minutes.

After a rainy and almost-cold Friday in Southern Illinois land, Saturday dawned clear and crisp, with a bright blue sky and equally bright sunshine. The day was perfect for a little bit of time travel.

As you may recall from reading this column over the years, The Other Half and I like to make our way to Metropolis each year for the annual Fort Massac Encampment.

The encampment is held at Fort Massac State Park, which is situated on grounds which overlook the Ohio River. The river, as you may know, was an important route of travel for those who journeyed to what we now call the Midwest during the 1700s and 1800s.

Our journey didn’t involve any travel on water. We motored to Metropolis in a modern, but rather noisy, mode of transportation. The vehicle seemed to have multiple buzzing and otherwise irritating noises of unknown origin. Oh, well.

This year, we were joined on our journey by a special visitor from the north, who now calls the flatlands of Central Illinois home.

Our goal on Saturday was to get started as early as possible. Somehow, we managed to pull that off. The reason for the early start was to get to Fort Massac ahead of the big crowds. The goal was achieved.

As we strolled from a parking area to the fort, the sound of the past could be heard in the form of the bass beating of drums. And the aromas...goodness...the aromas...food being cooked in the great outdoors...wood fires...all hard to beat.

We arrived in time to hear a presentation involving reenactors who brought the Lewis and Clark expedition to life. While we were watching that little chapter of the past come back to life, notes of “old-time” music began to sound from nearby.

Reenactors were portraying a British fife, drum and bagpipe unit. We joined the many people who were listening to, and watching, the performance. I always look forward to hearing that kind of “old-time” music at the encampment.

Then it was back to the Lewis and Clark presentation: a tent was home to exhibits and activities which focused on the Corps of Discovery. We made a rubbing of an etching which reproduced William Clark’s signature that was carved into the stone at a landmark called Pompey’s Pillar, which is located not far from Billings, Montana.

Clark, along with Meriwether Lewis, were the commanders of the Corps of Discovery. Clark carved his signature into the stone on July 25, 1806. Clark wrote in his journal that at about 4 o’clock in the afternoon, he ascended to the top of what he described as a “remarkable rock,” and “from it’s top had a most extensive view in every direction.”

During our visit to the encampment, I acquired a copy of an etching which was created by Paul Revere. The etching was an early form of political propaganda which was about the Boston Massacre.

Early last week, I also acquired a copy of the final draft of the Gettysburg Address, which was shared with me by President Abraham Lincoln. In person. More about that to come. In the for whatever it’s worth category, the Clark rubbing, the Revere etching and Mr. Lincoln’s draft of one of the most famous documents in the nation’s history are now among the special treasures which I have managed to accumulate on The Journey Through Life.

Our visit to the past also included a stop for a couple of cookies, cinnamon and lavender, which were baked in a stone oven. We also met a couple of folks from our neck of the woods who had some very special hand-crafted items on display.

The visit to the past ended with buffalo stew, served in a bread bowl, for lunch. Picnic style. Good stuff. We originally thought we would try a ham pie. Ham pies apparently were quite popular. And very sold out. Such is life.

Our journey back to the present included a stop at the Section 8 Woods natural landmark near Cypress, where visitors can stroll along a boardwalk into the wetlands. Well worth the stop, if you haven’t been there.

As I mentioned way back in the beginning of the column, it would have been nice if Saturday could have stretched on...for maybe just a few more minutes. That being said, the time that the three of us were able to spend together was special...moments that will be forever etched in my memory...not unlike the signature that William Clark carved in the stone at Pompey’s Pillar on a July afternoon back in 1806.

One final personal note: thank you for the kind words which were shared by a passerby we met, ever so briefly, at the encampment.