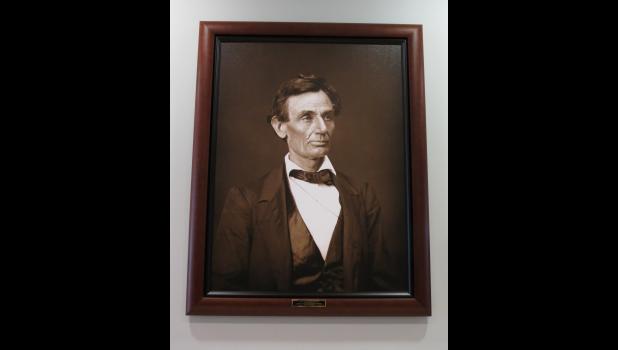 Portrait of 'a very common-looking man'

One hundred and sixty years ago this month, a fellow who played a rather important role in our nation’s history paid a visit to Union County.

Mr. Lincoln only spent a few days in Union County when he visited 160 years ago, in September 1858. He came to our little corner of the world for a political event. Mr. Lincoln joined Stephen A. Douglas for a debate, which was held in Jonesboro on Sept. 15 of that year. Today, the Lincoln Memorial Picnic Grounds are located on the site where the debate took place. But then, you knew that already. Right?

And, no, this scribe did not cover the debate. I’ve been doing what I do for a long time. Just not that long.

We do have a pretty good idea of what Mr. Lincoln did while he was in Union County during his visit. This week, just to do something little bit different, let’s take a brief peek at our history,

Not long ago, a fellow traveler on The Journey Through Life shared a book titled “The Lincoln-Douglas  Debates: The First Complete, Unexpurgated Text,” which was edited by a fellow named Harold Holzer. “Unexpurgated,” in addition to being hard to spell and hard to type, sounds like something one of our cats did to get rid of a hair ball, but that’s another story.

Holzer set the scene for the Lincoln-Douglas debate in Jonesboro, which was the third in a series of seven debates the two candidates held during a U.S. Senate campaign:

“They called the region Egypt – perhaps because the throat of land here that jutted into the confluence of the Ohio and Mississippi rivers looked so much like the Nile Delta; possibly because the old Indian mounds resembled pyramids; or maybe because its best-known town was named Cairo. No one knows for sure. What was indisputable, however, was that this was anything but Lincoln county.” Yup.

“In terms of its immediate impact,” Holzer wrote in his 1993 book, the debate held in Jonesboro “proved a disappointment, not so much because the views expressed that day were empty, but because the town itself was. Jonesboro proved simply too small and too remote to attract a large audience.”

Holzer recalled that a New York journalist who apparently had the misfortune of covering the debate convinced himself that he was covering a campaign on the prairies  and was horrified to find himself sweating the humid air. The day of the debate apparently was hot, too. Imagine that. Hot, humid weather during the summer in Southern Illinois. Surprise.

Local author and historian Darrel Dexter, someone who probably is familiar with hot and humid summer weather in Southern Illinois, also wrote about the Lincoln-Douglas debate in Jonesboro in his book titled “A House Divided: Union County, Illinois, 1818-1865,” which was published in 1994. Dexter wrote that the debate was: “Perhaps the most notable event in Union County history.” Amen.

Dexter wrote about David Layman (D.L.) Phillips, an Anna man was a “friend and political ally of Lincoln.” Mr. Phillips also was an early editor of the Jonesboro Gazette, so I guess he would have been a predecessor of the scribe who is compiling this little ditty.

“D.L. Phillips met Lincoln in Centralia the day before the Jonesboro debate and accompanied him to Anna on the Illinois Central Railroad. When they arrived at the Anna depot, no one met them at the train. Lincoln stayed with Phillips at his home on Main Street in Anna.” The home still stands. The depot, not so much.

That night, Dexter recalled that Lincoln, Phillips and the Anna man’s son, Judson, went to Jonesboro to visit with two reporters from the Chicago Tribune. As far as we know, there were no television cameras present. The group spent part of the evening watching Donati’s comet.

The next morning, Lincoln and a group of local residents went on a ride out to the bottom lands of Union County, or as Dexter wrote, to the “alluvial plains of the Mississippi.” As they drove, “Lincoln told funny stories.” Oh, to have been on that little adventure. Lincoln then would spend some time on the Jonesboro square.

Following the debate, Lincoln spent the night in Anna, as a guest of Phillips. The two men sat on the porch and talked. A “goodly number” of neighbors came in to visit. Folks sitting on a porch on a September evening and talking. That’s why I’m glad our old house has a porch. Even if Abraham Lincoln didn’t stop by one evening. As far as we know.

You may be asking yourself why we’re taking a trip way down memory lane this week. And I apologize for being a littly windy. Perhaps I should have taken a lesson from Mr. Lincoln’s Gettysburg Address, which was, and this a vast oversimplification, short and sweet.

Last Thursday morning, a ceremony was held to unveil a portrait of Mr. Lincoln which is now on display at the Union County Courthouse in Jonesboro. For the record, the permanent installation is made possible by donations from the Illinois Judges Association, the Illinois State Bar Association and their respective foundations: the Illinois Judges Foundation and the Illinois Bar Foundation. Printed on canvas, the image of the beardless Lincoln is encased in a richly stained wood frame and measures 30-inches wide by 40-inches tall.

The portrait, in a way, makes Mr. Lincoln more than a visitor. Now, he has become more than just a man who stopped in our neighborhood for a couple of days. He’s part of us.

The portrait captures an image of a man who was considered to be, well, less than attractive. Lincoln, it seems, was aware of how people saw him. Consider an item which appears on the website www.azquotes.com, in which Lincoln, when he was president has a dream...

“...He was in a party of plain people, and as it became known who he was, they began to comment on his appearance.

“One of them said: ‘He is a very common-looking man.’ The President replied: ‘The Lord prefers common-looking people. That is the reason he makes so many of them.”

I would encourage you to stop by the courthouse and take a look at the portrait. After you see the portrait, consider that this common man, one of us, could accomplish so much for the nation. Consider, too, that this man spent just a few days right here, with us...