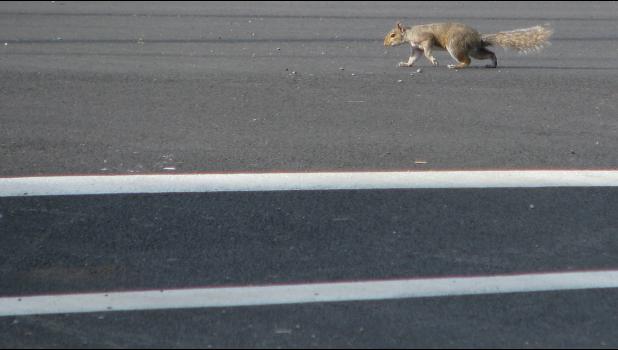 Please read this...Fake gnus and some other musings...

Somebody told me one day last week that rhinoceroses had been seen in Balcom. I figure that if somebody tells me something, in good faith, it's kind of like finding something on the internet. After all, every thing you see on the internet is true. Right?

Truth be told, I just wish the big animals seen in Balcom would have been critters that are easier to spell. Rhinoceroses is not easy to spell on a good day.

And then there's the family name for those big, horned creatures which most of us just get to see at a zoo. Rhinoceroses belong to the family Rhinocerotidae. Sure hope I spelled that right.

Furthermore, according to the editor's official laptop dictionary, the origin of the word "rhinoceros" goes back to the Middle English, via Latin, from the Greek (of course it's not going to be simple): "rhinokeros," from "rhin," or "nose," plus "keras, or "horn."

FAKE NEWS ALERT. NUMBER TWO. Your intrepid scribe learned late last week that there appears to be a shortage of tiny orange sticker thingies. Somebody needs to look into this. I'm guessing that a rhinoceros took all of them to Balcom.

By the way, you get to figure out which of the FAKE NEWS items are really FAKE NEWS.

All right, now that we've bored you with some FAKE NEWS, let's move on to some good stuff.

A fellow traveler on the Journey Through Life shared a column written by a scribe named David Porter. Porter's creation, called "The Ramblin' Man," appears in The Cairo Citizen newspaper and, I'm guessing, in other publications, too.

Porter wrote a column about writing columns which appeared in the October 5 edition of the Cairo newspaper. Porter shared that writing a column is hard to do, "mainly because it's difficult to come up with a topic week after week." Amen, brother.

Porter did note that there are lots of folks who do jobs that have real challenges and difficulties. Doctors. Nurses. Law enforcement personnel. Teachers. Electricians. The list is endless. As Porter the columnist noted: "There are a lot of hard jobs out there. This isn't one of them."

While those folks are doing real work that matters, some of us are writing stories (or columns) and taking pictures for a living.

Porter also focused on what is called the "infinite monkey theorem." The idea behind this little gem is that "if you put a bunch of monkeys in a room with a bunch of typewriters, they will randomly strike letters that eventually will spell out actual stories like the complete works of Shakespeare."

This got me to thinking, which is a bad thing, sometimes, and a not an all that frequent occurrence. Just ask The Other Half. She's the thinker in our Journey Through Life, which is a good thing.

If monkeys can create epic literature, could other animals do the same thing? Let's consider some of the possibilities.

Rhinoceroses: They're probably too busy finding fun things to do in Balcom. I haven't been to Balcom in a while, so I don't know what a rhinoceros would do there.

Squirrels: Squirrels would be my first choice as writers. 'Cause they're nuts. The squirrels and I would get along quite well. We could work together.

Cats: Some cats, maybe. Not Bob, though. Bob's our cat. Bob is crazy. Bob would write the column, and then he would shred the computer into thousands of tiny little pieces.

Skunks: Whatever they created would be straightforward. Black and white. Sadly, everything they wrote would stink.

Grizzly bears: Grizzly bears could write whatever they wanted to write. Nobody would argue with a grizzly bear.

Wunderpus. Spiny lumpsucker. Pleasing fungus beetle. Raspberry crazy ant. Satanic leaf-tailed gecko. Tasseled wobbegong: Don't know if any of these critters can write. Just liked their names. Found them online (so they have to be real) on a website called Mother Nature Network. The critters were featured in an article headlined "21 animals with completely ridiculous names." Can't argue with that.

Porter closed his column by pointing out that there's supposedly a laboratory in Sweden "with a dozen monkeys and as many typewriters...After 30 years, there's been no Shakespeare manuscripts. But there's been an amazing number of columns that look just like this one."

Um, pardon me, there's a wunderpus using my computer...