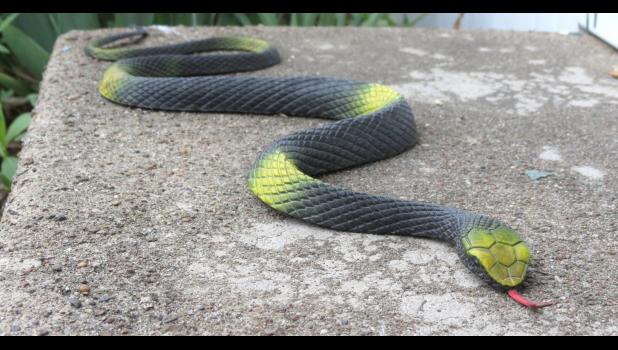 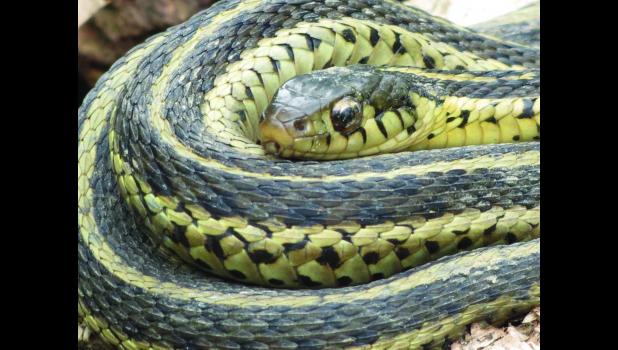 'No reason to fear the snakes in your garden...'

...the “snow snakes” that were created on the hood of the world’s ugliest pickup truck were able to make their appearance thanks to a fake snake.

Your writer dropped the plastic python on the April snow which had fallen somewhat unexpectedly in our little corner of the world.

The pseudo snake comes with a bit of a story, too...

...about 10 years ago, back in what I heard referred to as “The Before Times,” as in the good days before the pandemic, your intrepid scribe/staff photo person was motoring home after attending a local photo opportunity on a very cold December evening.

While motoring through a local metropolitan area, which shall remain nameless for no good reason, I spotted what looked like a snake in the middle of the road.

Such a sighting would have been very, very strange on a cold December evening in Southern Illinois. Curiosity got the best of me. I stopped the car. Got out. And approached the object in the middle of the road.

The object turned out to be a fake snake. I rescued the faux critter from certain flattening on the road and brought it home, where it has remained ever since. I think the night of our recent pandemic April snow was the first time the critter had been outside since it came home with me, lo, these many years ago.

Snakes came to mind when I happened to run across an article about the legless reptiles which was posted on the University of Illinois Extension website.

I know a lot of people, maybe even you, do not like snakes. With that in mind, let me share the Extension article...

URBANA, Ill. – As spring progresses, many will have their hands in the dirt of their backyards, pulling out weeds and breaking up soil to prepare for the ultimate tomato patch. Coming across a snake in the grass or in the dirt may startle even the bravest person and could result in a failed garden for the fainthearted gardener.

There’s no reason to fear the snakes in your garden, says Joy O’Keefe, University of Illinois Extension wildlife specialist. “Most are harmless, and many are providing valuable ecosystem services, eating the pests you loathe even more than the snakes.”

Three snakes commonly found in gardens across most of Illinois are, from smallest to largest, the DeKay’s brownsnake, eastern garter snake and the gray rat snake.

The DeKay’s brownsnake is only 9 to 13 inches long, with a very small home range. Brownsnakes primarily eat earthworms, slugs and snails, using their tiny, slender teeth to extract snails from their shells. They often hide in woodpiles.

“Keeping this slug predator around could be beneficial to your hostas and other prized plants,” O’Keefe says.

Eastern garter snakes are ubiquitous in Illinois. While this larger (16 to 26 inches) snake will eat worms and snails, it often munches on larval and adult toads, frogs and salamanders and lives under debris in yards.

“Remarkably, garter snakes can tolerate poisons in the skin of these animals,” O’Keefe says. “Two to four suburban backyards could be home to 10 to 20 garter snakes, more if there is water nearby.

At 42 to 72 inches in length, gray rat snakes are much more conspicuous in their environment and often climb trees and rocks. Young snakes are blotched until they reach about 3 feet in length, at which point their pattern fades and they have a gray or black appearance.

“Rat snakes can help control rodent populations; thus, an intrepid rat snake may follow a mouse into your house,” O’Keefe says. One rat snake could range across an entire neighborhood, but the amount of area they cover will depend on food availability.

“A rat snake may appear menacing, even vibrating its tail in leaf litter when disturbed, but it is completely harmless,” O’Keefe says. “If they are in your way, you may safely move any of them without fear of being injured. These species rarely attempt to bite humans, none are venomous, and they cannot penetrate garden gloves with their teeth.

So...there you have it...maybe...snakes can actually be a good thing for your garden...and I know there are a lot of gardeners out there. Fake snakes, on the other hand, might not be good for anything other than dropping in the snow...