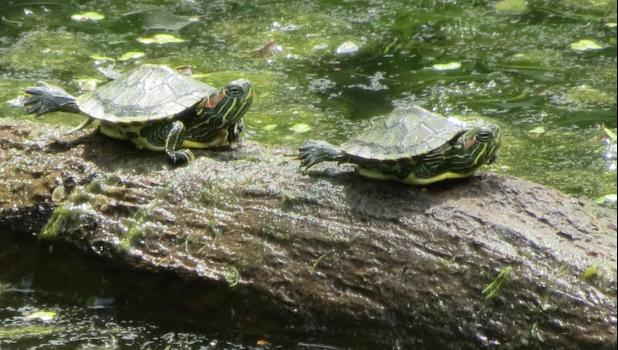 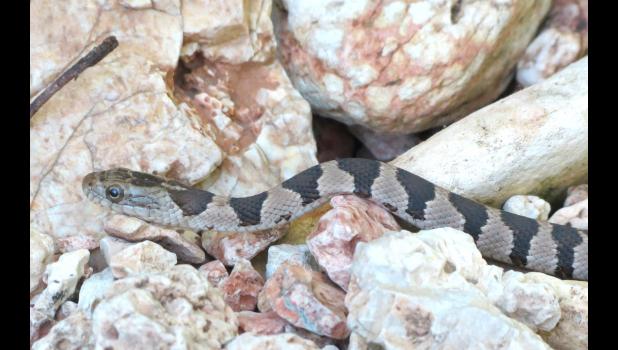 Didn’t see any of those critters during the past week. Did see some young turtles...and a young snake...and some “Jesus bugs” of undetermined age.

To tell you the truth, I had not heard of “Jesus bugs” until last Saturday evening. That was when The Other Half and yours truly went on what we’ll call a pandemic date.

The date involved giving her an opportunity to get out and see a little bit of the world around us. She hasn’t been able to do a lot of that sort of thing since about the middle of March or so.

That’s not to say she’s stuck at home completely. There’s some garden space up the road a bit, where I believe she has put something like 10,000 potatoes in the ground.

She also has a garden right out the back door, and the front door, too. She likes to garden, which is a bit of an understatement.

Back to that “date” we went on last Saturday evening. We motored to one of our favorite spots in Union County, the Trail of Tears State Forest. Like many other places, the state forest had been closed, courtesy of the pandemic, which is proving to be a very unpleasant visitor.

The state forest is one of the many places which has now reopened, so off we went. Turned out that we pretty much had an entire forest to ourselves.

As we often do during a visit to the state forest, we kept an eye out for whatever critters we might see. Listened for the sounds of the forest, too.

Without getting into a big discussion about theology, let’s just say scripture recalls a story about Jesus walking on water – I guess that’s where the “Jesus bug” connection comes in.

The Other Half also was kind enough to point out a young snake that was out enjoying the evening with a stroll through the creek bed. I guess “stroll” really wouldn’t be the right word for what a snake is doing.

Anyway, I had learned something new, so we could go home.

For the first time since March, I paid a visit to the Lincoln Memorial Picnic Grounds in Jonesboro. Just wanted to go a walk at the picnic grounds...maybe take in a little bit of the spirit of Abraham Lincoln. Mr. Lincoln visited what is now the home of the picnic grounds a few years ago.

Didn’t get to talk with Mr. Lincoln while I was at the picnic grounds. I did see several very young, and very cute (at least for a reptile) turtles.

Before we wrap this up, it’s time for another batch of really funny jokes. The daily supply of laughter (?) for the coming week comes from a website called “Best Dad Jokes.” Enjoy.

Thursday: “What do you call an elephant that doesn’t matter? An irrelephant.”

Friday: “What do you get from a pampered cow? Spoiled milk.”

Saturday: “I like telling Dad jokes. Sometimes he laughs!”

Sunday: “Did I tell you the time I fell in love during a backflip? I was heels over head!”

Monday: “I ordered a chicken and an egg online. I’ll let you know.”

Tuesday: “It takes guts to be an organ donor.”

Wednesday: “If you see a crime at an Apple Store, does that make you an iWitness?”

One more thing for this week...happy anniversary to my sweetheart. Don’t think we ever had any kind of discussion about a pandemic when we started this journey. One more special memory...

(*As is often the case, I will note that since this information was found online, it has to be true.)