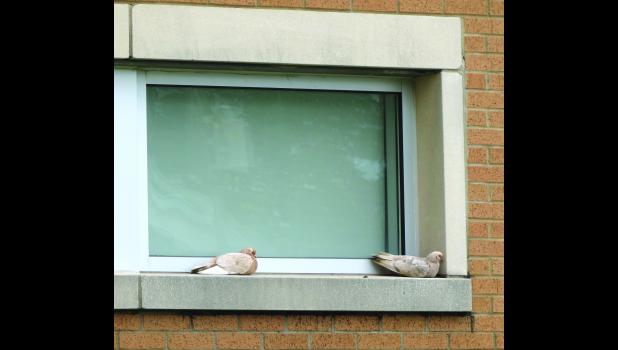 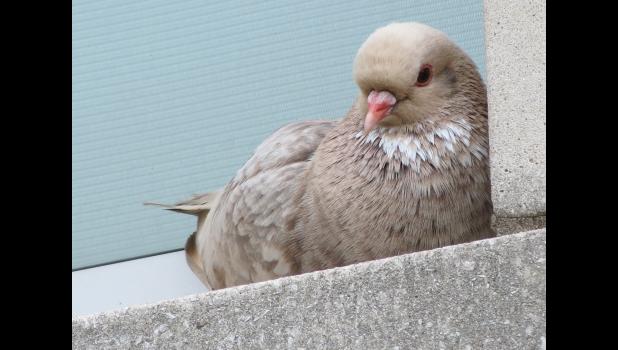 This week is going to be about trying to tie up some loose ends...well, as best as one can do in the midst of a pandemic. Seems like you just about have a loose end tied up, and the other end starts to unravel...

Don’t know about you, but before the pandemic started, yours truly sometimes wondered if it was possible to ever get “caught up,” whatever that might mean.

Now, it seems like getting caught up involves the proverbial taking two steps forward...and then like a bazillion steps backward...

...first...about those birds which are in the pictures you see...they’ve been recent hangers-on at the Union County Courthouse in Jonesboro.

You might remember Snowball, a winged, feathered critter that showed up at the Union County Courthouse in Jonesboro way back when the pandemic was just getting started. At some point, Snowball moved on...perhaps to a parallel universe where there is no pandemic.

Enter Jack and Jill...two lovebirds that have been hanging around at the courthouse for a while. Along with a cardinal...and...from what I heard last week...a bunny.

Critters like Snowball, and Jack and Jill, are helping to provide at least a little bit of distraction during the craziness we are experiencing. Guess you can kind of say that all of this stuff is for the birds...or maybe you wouldn’t say that...

...wanted to say thank you to a couple of folks who shared some kind words during the last couple of months. Both messages came in a somewhat old-fashioned way...I think we call it “snail mail” these days. One was even hand-written. Who does that sort of thing anymore?

One of the notes made its way to Southern Illinois all  the way from Rockville, Maryland. The note was accompanied by an article from some newspaper called The Washington Post. The article featured a photograph from a recent rather newsworthy event which happened right in downtown Anna.

The note mentioned that the writer enjoyed reading news in The Gazette-Democrat about people she grew up with...and remains in contact with. That, I think, is what we are all about. By the way, Bob says hello to everybody in Maryland. He would have typed the message himself, but he’s busy taking another nap. And another by the way: The Other Half spent some time back in the day in Maryland.

The other note came from a nice person in far away Metropolis, which is kind of a special town for The Other Half and yours truly.

Metropolis is the home of the annual Fort Massac Encampment, which traditionally is held each year in October. This year...who knows?

You may recall that The Other Half and her other half try to make our way to Fort Massac each fall for the Encampment. We enjoy being able to do a little bit of time traveling. The Encampment recalls life in our little  corner of the world back in the 1700s and early 1800s. Right now, I’m thinking that if we could really go back in time, we might not come back.

The note from Metropolis included a memento from a time gone by...just not as far back as the 1700s. The memento appeared to be a promotional item for a business in Marion. When the item was printed, folks had rather simple phone numbers...in this case, it was 745. That’s all. Just 745.

The card also featured a little bit of humor from back in the day...here are a couple of the items:

“And now, children,” said the harassed woman at her small son’s Christmas party, “there will be a special prize for the one who goes home first.”

“Report received by a Montreal father from his young son’s teacher: ‘Dull but steady – would make a good parent.”

“The secret of writing is to learn the big words – and then learn not to use them.” H.G. Hutcheson

Wise words, indeed, from a gentleman who is also supposed to have uttered this little gem: “One of the reasons why the Ten Commandments are so short and to the point is the fact they were given direct and did not come out of committees.”

I say that Mr. Hutcheson is supposed to have uttered the words of wisdom about the Ten Commandments because I found the quote on the internet. As is often noted in this space, if it’s on the internet, it has to be true. Right?

Oddly enough, though, I could not find out anything else about Mr. Hutcheson. Apparently, all he did was utter two sentences during his entire life and was never heard from again.

Well, that’s enough for this week...

Thank you, again, to the folks who took the time to actually sit down, hand write...or type...a note and send it along. Your thoughtfulness means more than you will ever know.