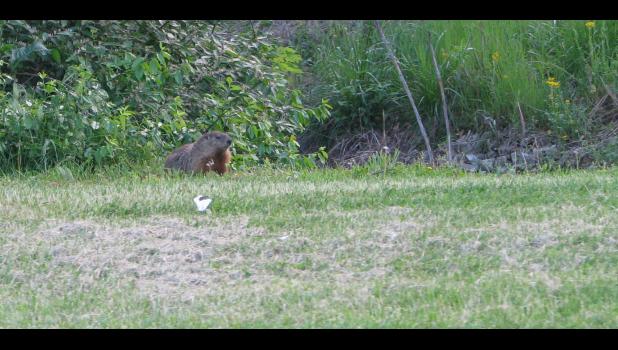 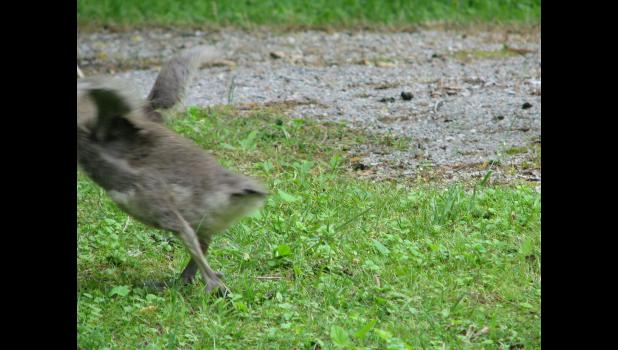 Groundhogs, demons and Robert Frost, too...

The goal on Monday was pretty simple. Drive home for lunch. Eat lunch. Drive back to The Paragraph Factory.

Do not, as in absolutely do not, run over any cute, furry rodents.

Chuck was out wandering around when I saw him a couple of times during the evening hours last week. I was glad to see Chuck.

Except for the evening when Chuck, once again, decided that hanging around on the edge of the highway was a good way for a groundhog, or woodchuck, to spend some time.

Fortunately, Chuck made a rapid exit from the edge of the highway when a pickup truck passed by, mere inches away. I think Chuck was heading for his nice comfy groundhog hole. To his credit, and much to my surprise, a groundhog can move pretty fast.

That brings us to an item which I found on wikipedia, which, as you may know, is one of the many sources of wisdom and knowledge which can be found on the internet.

“Woodchuck numbers appear to have decreased in Illinois,” the item declared.

Yup. By at least one. Which takes us back to the first couple of paragraphs.

On Monday of last week, I was heading back to The Paragraph Factory after taking a bit of a break for lunch. As I headed into the outskirts of suburban Anna, one of Chuck’s cousins decided that it would be a good time to run across the highway. The outcome, in a word or two, was not good for Chuck’s cousin. And it put a damper on my afternoon, too.

I suppose a little bit of good came out of the mishap, if you consider learning about demonesses and poetry to be a good thing.

Thanks to wikipedia, I also learned about Ammit. Maybe you’ve heard of Ammit, especially if you happen to be into ancient Egyptian gods and demons and other things that might show up in Stephen King novels.

Ammit is a demoness and goddess with a body that is part lion, part hippopotamus, part crocodile and, I’m pretty sure, part groundhog.

If what I learned online is true, and has to be true, since it is online, Ammit lives near the scales of justice, in a place called Duat, which is between Anna and Cobden.

Ammit likes to hang out with Anubis in the Hall of Two Truths, which is not far from the Hall of Half Truths, which is still in existence today. Between the two of them, Ammit and Anubis come up with bad things to do to people who are driving back and forth to work in their chariots and run over cute, furry rodents.

In learning about groundhogs, and in feeling sorry for myself for running over one of ‘em, I discovered that Robert Frost wrote a poem about the groundhog. Mr. Frost called his poem “The Drumlin Woodchuck.” The poem had nothing to do with running over a groundhog while driving back to work. And, just so you know, a drumlin is some sort of oval hill.

Mr. Frost’s poem is written from the critter’s perspective. I think. And, unlike Chuck’s cousin, Mr. Frost’s groundhog lived to see another day...mainly because, as the rodent observes: “I have been so instinctively thorough About my crevice and burrow.”

Finally, a message to Chuck:

If you are thorough,

you’ll stay in your burrow,

read some poems, drink some tea;

and if you don’t mind,

and ask demons to stay away from me.