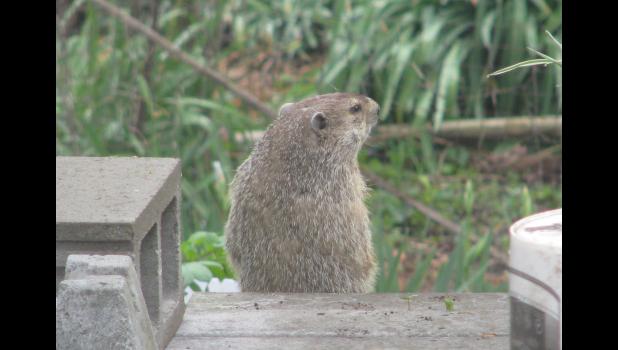 So, I'm going through the Monday morning routine, getting ready to start another week at The Paragraph Factory.

I glance out the back door. Much to my surprise, I spot the back of a furry brown head, streaked with a fair amount of gray (hmmmm...just like mine), which belongs to a critter taking a break on the top step to the porch in front of our shed.

Moments later, the critter turns its head, and I can confirm my first thought: "I'm not ready to go back to work this week."

Actually, when the critter turned its head, I was able to determine that the pudgy fur ball in our backyard was not the Easter bunny, a day late and two short ears too short.

The critter was a groundhog. AKA woodchuck. And that was a good thing.

You see, late last week, I had made a mental note of sorts to ponder how I had been missing my buddy Chuck. After I made that mental note, the weekend came. Time passed. The mental note vanished into the dust bin located between my ears.

Sometime during the wee hours of a dark Monday morning, I awoke, and tried to remember that mental note. To no avail. Thanks to a miracle involving a rodent, the topic of my mental note came back.

As best as I can tell, Chuck inhabits some property near the railroad tracks in Anna. I had seen Chuck a lot during the past year, out enjoying the grass and trees in his neighborhood. Lately, though, I hadn't seen Chuck. I was a little worried that Chuck might have met a bad end, as sometimes happens.

One day last week, though, I caught a brief glimpse of Chuck, doing whatever Chuck does during the day.

Chuck, you see, is a groundhog. A groundhog also is known as a woodchuck. With a little bit of help from a cousin which showed up in our backyard on Monday morning, I was able to remember that I wanted to share some thoughts about Chuck.

Pondering Chuck's fate, and the unexpected appearance of the Monday morning fur ball, led me to do about 47 seconds worth of research about groundhogs, or woodchucks, to prepare this week's colyum.

The research involved a couple of visits to the dictionary which came with my handy, dandy laptop computer.

For one thing, I learned (or relearned...sometimes it's hard to remember) that groundhog is one word. Same goes for woodchuck. So, it's not ground hog, which might suggest some kind of meat you cook on the grill. I suppose that if you were hungry enough, you might consider cooking ground groundhog. It probably tastes like chicken. Ground woodchuck might be a problem, though. Splinters.

As the result of my in-depth research, I also learned that a groundhog/woodchuck is "a North American marmot with a heavy body and short legs," which belongs to the family Sciuridae, which, I think, may be an Irish name.

Furthermore, thanks to my computer dictionary, I learned that a marmot is a "heavily built, gregarious, burrowing rodent," which typically lives in mountainous country. I checked when I went home for lunch on Monday. There are no mountains in our backyard.

(As of a couple of weeks ago, we did have a mountain of wood chips in the driveway. I moved them. All of them.)

The dictionary shared that the word "marmot" may somehow be traced back to the Latin words "mus montanus," which mean "mountain mouse." And now, you know more about marmots than you ever wanted to know.

The groundhog which showed up in our backyard on Monday morning seemed pretty relaxed and unconcerned as it scoped out what was probably groundhog heaven. The critter appeared to be looking over a food pantry which was growing in The Other Half's garden. Groundhogs especially seem to like sweet potatoes.

I don't know what kind of schedule a groundhog/woodchuck has during the week. I hope our buddy in the backyard, and Chuck, too, have been enjoying their week.