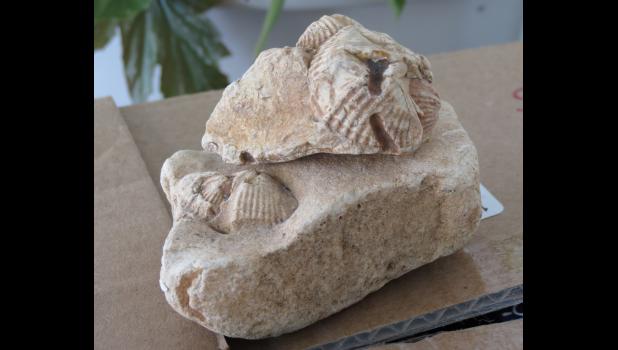 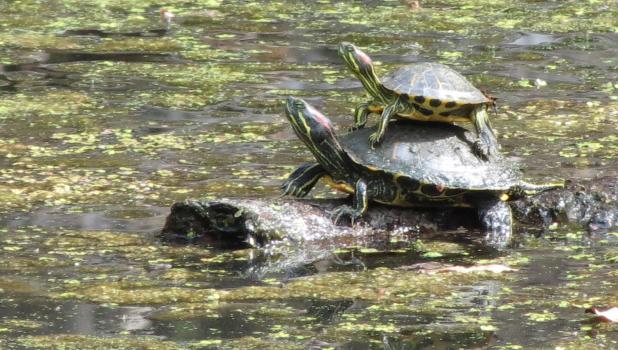 In celebration of National Fossil Day...

This week, we’re making note of National Fossil Day, which was celebrated around the world and throughout the universe on October 14 with parades, hoopla and lots of other exciting activities.

Speaking of fossils, let’s start with something I saw about a Tyrannosaurus rex fossil skeleton which sold last week at an auction for about $32 million. Yup. Thirty two million dollars. Amazing.

That got me to thinking: How many fossil seashells, at about a buck-fifty each, would an amateur fossil hunter (like yours truly) have to find, and sell on eBay, in order to retire comfortably?

The answer, sort of, is about 21,333,333. We have a fair number of fossil seashells, but I don’t think it’s quite enough to generate a comfortable retirement income. Oh, well.

The Other Half and your amateur fossil sleuth got an early start on our National Fossil Day celebration last Sunday afternoon, when we went on another pandemic date.

One of our goals was to check out the fall colors, which are starting to make an appearance in our little corner of the world. We saw lots of oranges and reds and yellows. We think the colors could be at their peak by next weekend, so we may need to go on another “date.”

We also managed to get in a little bit of fossil hunting on a glorious, sunny and warm autumn afternoon, and brought home a couple of treasures.

For National Fossil Day, I planned to cook up a big pot of stone soup, which is pretty much all you can do with a fossil. Sure, you might want to put some stegosaurus rib bones on the grill, but that would be pretty much pointless, since all you would have is stone bones. Which probably would not fit on a grill.

I figured we would sing a couple of National Fossil Day carols: “Oh, Trilobite,” “Go Tell It on the Fossil,” “Rudolph, the Red-Nosed Raptor” and a paleontological version of “Silent Night” which describes Earth after an asteroid struck the planet about 65 million years ago and pretty much wiped out life as we know it, including shopping on Black Friday.

As you probably know, yours truly enjoys finding fossils. Truth be told, it’s good therapy for me...heading out to the woods...finding some rocks...and see what treasures the rocks might hold.

Somewhere, in a box in a closet upstairs at our humble abode, there’s a fossil that a much younger version of me discovered while on a hike during a summer YMCA camp near Grafton, Illinois. (I’m so old that the camp took place before The Village People unleashed their YMCA song on the universe.)

That summer camp fossil was a horn coral. Since then, I’ve found other corals...in Southern Illinois...in Indiana...in Kentucky...

In keeping with this week’s theme, I thought I would mention a story which I stumbled across while working on the Page from the Past feature which appears pretty regularly in this publication.

The story appeared in the September 24, 1970, edition of The Gazette-Democrat. The headline for the article declared: “200 Feet of Sea At One Time Covered So. Ill.” The headline, by the way, offers an explanation as to why we find fossils of sea shells in “So. Ill.” The story was about work being done by a geologist at Southern Illinois University Carbondale.

The opening paragraph in the long-ago story read: “Some 350 million years ago, pale delicate corals waved under 200 feet of sea stretching across Southern Illinois, only to be trapped and killed as the water receded leaving the tiny animals buried in mud.” The mud eventually became rock. The corals eventually became fossils, like the one I found at summer camp.

A couple of connections specific to Union County were mentioned in the 1970 story.

“One large fossil, a colony of thousands of tiny corals, grouped in an irregular triangle, was found at Green Creek west of Jonesboro,” the story shared, as well as... “One excellent specimen was found...on Clear Creek, Union County, a cornucopia-shaped fossil.”

Mention also was made of “Lingle Limestone,” which was “named from limestone beds on Lingle Creek in Union County, Illinois... It is exposed in Jackson, Union and Alexander counties in southwestern Illinois... The fauna of the Lingle...is rich in brachiopods and corals.”

Well, that’s about enough for now about old rocks...from an old guy... And, if you want to plan ahead...next year’s National Fossil Day will be on October 13. 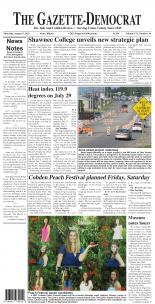