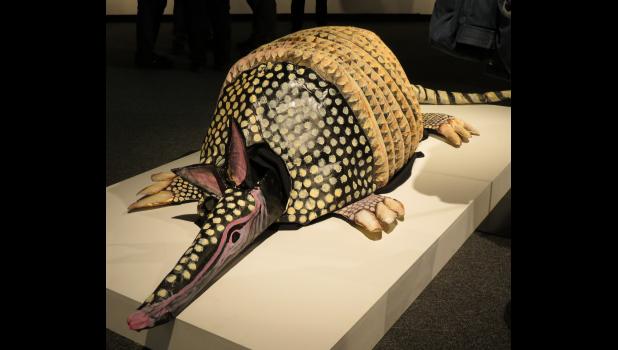 Bored...not much of a chance of that happening

Not all that many years ago, a fellow traveler on The Journey Through Life who, at the time, was toiling at The Paragraph Factory, commented that she did not think yours truly was bored very often.

Her observation was, as they say, spot on. And that certainly would have been case last Friday, Saturday and Sunday.

Friday afternoon, your writer paid a visit to Stinson Memorial Library in Anna. As noted last week in this space, the Friends of Stinson Library were having a winter book sale. I didn’t really “need” more books. That being said, I did manage to find three books which needed a good home.

After the visit to the book sale, yours truly and The Other Half went on a “date.” Well, that’s what we called it. Seemed like the kind of thing to do on a Friday evening.

We motored to Carbondale to attend a reception for a new exhibit which is on display at the University Museum. As the name might imply, the museum is on the campus of Southern Illinois University Carbondale, which, by the way, is our alma mater.

The art works which are on display in the exhibit are, well, wondrous, colorful, imaginary, thought-provoking...let’s say a pot of gold at the end of a rainbow of creativity. Goodness, that was way more philosophical than my simple little mind can handle.

“Women’s Voices” is on display through March 21. Check it out. You might even see an armadillo.

Saturday morning involved the usual chores which are part of your writer’s life. That’s another story.

Then it was off to the Civil War Weekend at the Anna Arts Center. Would have liked to have spent more time listening to the folks who were guest speakers at the event.

Saturday afternoon, yours truly headed to Giant City State Park, which is just up the road, in the suburbs of metropolitan Makanda. A program titled “Snake Road: A Southern Illinois Treasure” was scheduled at the visitors center at the park. The program was presented by biologist John Palis.

Snake Road is closed twice each year, in the spring and in the fall, so critters like snakes can migrate to find a cozy place to spend the winter. Makes me kind of wish I could migrate to someplace else for the winter, too.

Palis said he has made 177 visits to Snake Road and has recorded some 3,845 snake sightings. That would be much more successful than yours truly and our daughter experienced during a visit to Snake Road on a sweltering September afternoon in 2019. We saw a toad. And a spider. No snakes. It was suggested that we might try again on a milder day in April, or maybe October.

Sunday afternoon, it was back to the visitors center at Giant City State Park, where a program about the Underground Railroad in Southern Illinois was slated. The Other Half and yours truly made another date of it.

And so did a lot of other folks, too. A standing room only audience was on hand. I’m guessing somewhere in the range of 60, or more, people. It was good to see so many folks interested in history, especially the history of Southern Illinois.

As previewed in an announcement about the program which was shared ahead of time, the Underground Railroad was a vast, but secret, network of travel routes and safe havens to help African Americans escape slavery.

I think we sometimes forget, or maybe even overlook, some of the landmark events which have been part of the story of Southern Illinois, like the story of the Underground Railroad. Same goes for some of the special treasures we have right here in our backyard, like the Snake Road.

We do live in a special place. Programs like those presented last weekend at Giant City State Park help us to remember how special Southern Illinois truly is.

By the way, a number of programs are presented during the course of the year at Giant City State Park. You might want to check out the schedule, which you can find online.

As you can tell, I didn’t have much time to be bored last weekend. Don’t expect that will happen any time soon, either.

I’m going to close this week with a note to my Valentine. Thank you for all of the dates we’ve been on so far...and for the ones which are yet to come. Happy Valentine’s Day.