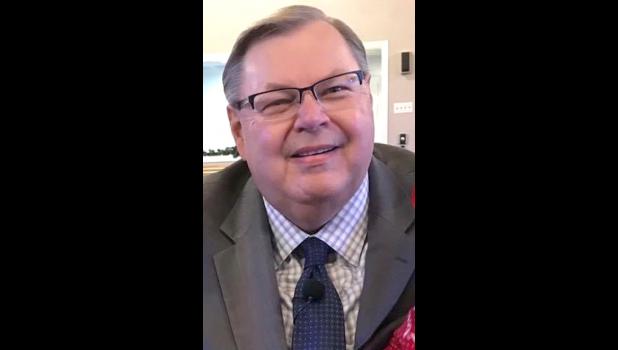 He is survived by his wife, Cheryl “Sherry” Goforth of Cobden; children Jennifer (Travis) Hill of Carterville and Tony (Meredith) Goforth of Jonesboro, Ark.; grandchildren Mackenzie Hill, Abby Hill and Olivia Goforth; his father and mother-in-law, Bud and Donna Duty of Cobden; a nephew, Jeremy (Janelle) Duty of Anna; a niece, Robin Wilson of Anna; and a brother-in-law, Scott (Robin) Duty of Anna. He was preceded in death by his parents.

He served in the ministry at Apostolic Lighthouse Church for many years. For the past 10 years, he has served as pastor. Before pastoring, he served as the assistant pastor.

He spent his life devoted to sharing the gospel of Christ with others. He was the most giving human being you would have ever encountered. He was kind, soft spoken and loving.

Within the past few years he began driving a school bus for the Cobden School District. He loved his job, students and the staff that became family to him, a true Appleknocker at heart.

Rex was a beloved pastor, husband, father and papa to three grandgirls who were his pride and joy. He enjoyed spoiling them. He loved to surprise the girls with sprinkled doughnuts, trips to Chuck-E-Cheese and has become the best Barbie purchaser around.

When he was not spoiling his grandgirls, he enjoyed traveling with his wife, following the Green Bay Packers, reading and fishing, an old pastime he had come to enjoy again.

While we are sad that Rex left us too soon, we are comforted in knowing that someone so special will never be forgotten. He has gone on to his reward that he has preached so long about. Our loss is Heaven’s gain.

Arrangements were pending at this time.