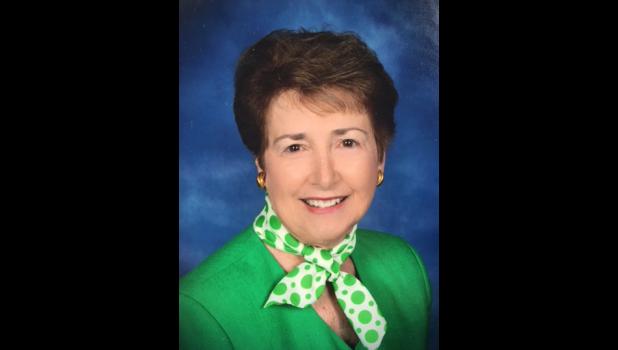 Patricia Reppert of St. Pete Beach, Fla., passed away on June 7, 2018, at the home of her daughter Dawn Hall and family in Delaware, Ohio.

She leaves a family of her husband, John; daughter Dawn and son Scott of Arlington, Va.

She attended public schools in Thayer and then upon graduation attended one year of secretarial school in Topeka, Kan.

While at Kansas State, she was a consistent Honor Roll Student, President of her social sorority (Kappa Alpha Theta) and as a senior was selected for membership in Mortar Board, a student organization which recognized the best female students at Kansas State.

In 1964 she married the love of her life, John Reppert of Anna,  and on completing her master of arts degree, they moved back to Anna, where he began employment as editor of the local newspaper, The Gazette-Democrat.

In 1966, John was drafted into the U.S. Army. Pat and John then moved frequently due to assignments in Arizona, California, New York, New Jersey, Kansas, North Carolina and Washington, D.C., as well as three overseas assignments to Germany, and three to Russia/Soviet Union.

Pat embraced a variety of aspects to living the life of a diplomat.  She enjoyed meeting new people, learning about other cultures and reconnecting with couples that they met in the Army.

Pat was exceptional in her hosting of diplomats, military officers and their wives, including dinners at her home for more than 50 Russian generals. She will be remembered for her welcoming personality and extraordinary compassion.

As John’s duties required frequent travel, Pat joined him for the majority of trips, including more than 50 within the Soviet Union/Russia.

Pat was also employed in the American Embassy in secretarial/administrative duties. John and Pat returned to Washington, D.C., where John retired in 2000.

Following John’s retirement from the Army, they subsequently moved to Germany, Cambridge, Mass., Arlington, Va., and finally selected their ideal residence in St. Pete Beach, Fla. During the years in Florida, she truly enjoyed beautiful water views, a relaxed lifestyle, exercising in the pool and making friends at ASPEC.

Funeral services will be at 1 p.m. Friday, June 15, at the First Evangelical Presbyterian Church in Anna. Interment will be in the Anna City Cemetery.

Friends can call after 11 a.m. and until the service hour at 1 p.m. Friday, June 15, at the First Evangelical Presbyterian Church in Anna.

The family requests that in lieu of flowers, memorial donations be made to the Alzheimer’s Association. Envelopes will be available at the church and at Rendleman & Hileman Funeral Home for donations; or contributions may be made directly, to an account that has been set up specifically in her name at Alzhemier’s Association, 14010 Roosevelt Blvd., No. 709, Clearwater, Fla. 33762; 727-578-2558; www.az.org/flgulfcoast.

Rendleman & Hileman Funeral Home in Anna is in charge of arrangements