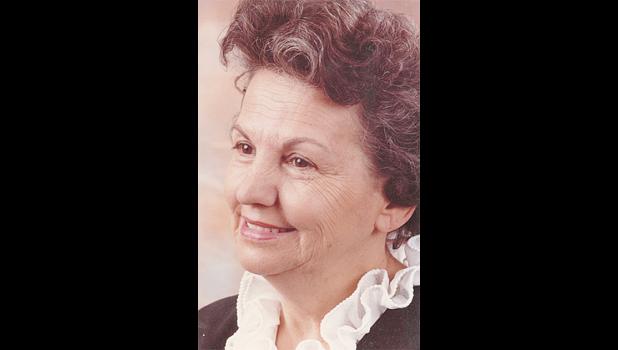 She was the youngest daughter of 11 children of Ferdinand Thelian Dalian and Rosalia Goestl, immigrants from Gottschee, which was a distinct enclave in the Holy Roman and Austro-Hungarian Empires for centuries. This incredibly beautiful land was culturally destroyed between the two World Wars.

The land on which her ancestors were born is now part of the Republic of Slovenia on the Austrian border.

Hers was a very patriotic family who found refuge in America with all her brothers and one sister serving on active duty during World War II, and Rene working as a secretary at the Navy Yards in Joliet.

Her father built the first house on what would later become the west side of Joliet. That house at 907 Kelly Ave. was where she was born on Sept. 7, 1925.

She was married to Salvatore Collofello before World War II, and after the war to Clyde J. Moore, who was born in Creal Springs and reared in Vienna.

Together they had two children, Lynn Moore, wife of Brian Marshall McCreery, and Gary Richard Moore, husband of Melinda Rumpf.

Her third husband was the love of her life, Richard N. Kojder, an accomplished musician, glass blower (in the old traditional European methods) and a man for all seasons.

They spent their happiest years in rural Ozark, where she passed away in the home they shared surrounded by her loved ones.

She was a devout Catholic all her life, and did not believe in the accumulation of wealth.  Rather, she paid her bills early, and then whatever money she had left went to veterans, missionaries, many Christian charities, no-kill animal shelters and anonymously to single mothers who struggled paying their utility bills.

She was a member of St. Paul’s Catholic Church, and attended Mass daily most of her life.

She was also a friend to animals, many which she rescued after being horribly abused, left for dead and deserted.

There will be a wake on Friday, Jan. 17, at Bailey Funeral Home in Vienna.  The Rosary will be recited at 4 p.m. Friday at the funeral home and all are invited to gather and participate.  The visitation will begin immediately following the Rosary service and continue until 7 p.m.

Mass of Christian Burial will be celebrated Saturday, Jan. 18, at 10:30 a.m. at St. Paul Catholic Church near Vienna. Father Thomas Barrett will be the celebrant.

Mrs. Kojder will be buried with her beloved husband Richard in Zion Cemetery, east of Ozark, and beside her brother, Clarence Dalian.

Memorials can be made to no-kill animal shelters, the charity of the donor’s choice or to single mothers who never have enough.

To share a memory or to leave an online message of condolence for the family, visit www.baileyfh.com.