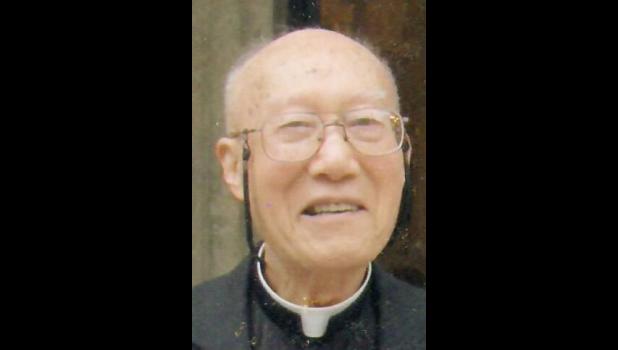 He studied for seven years at St. Meinrad Seminary to become a priest. Father Peter Hsu was ordained on June 9, 1957, in Techny, for the diocese of Nanking, China.

In 1978, unable to return to his own country, he was officially incardinated into the Diocese of Belleville.

Father Hsu’s ministry in the Diocese of Belleville included associate pastorates at Holy Rosary Parish in Fairmont City and St. Andrew’s in Murphysboro; hospital chaplaincies at St. Joseph’s Hospital in Murphysboro and the former St. Clement’s in Red Bud; parish administrator at the Sesser and Tamaroa parishes; and pastorates at St. Mary’s in Anna, St. Joseph’s in Prairie du Rocher, St. Aloysius in Royalton, and Sacred Heart in Zeigler.

He retired from active ministry in 1999. He was the pastor of the Royalton/Zeigler parish for 17 years.

He was preceded in death by his parents, one brother and three sisters.

Surviving relatives include his niece, Han Dong-Yu of China, and his great-niece, Han Liu of China.

A Mass of Christian burial will be at 10 a.m. Thursday, today, at St. Aloysius Catholic Church in Royalton, with Bishop Edward Braxton, Monsignor Ken Schaefer and Monsignor Thomas Flach officiating.

Union Funeral Home in West Frankfort is in charge of arrangements.

Memorials can be made to St. John’s Catholic School in West Frankfort and/or to Our Lady of Mt. Carmel Church building fund.

Online condolences of sympathy can be made at www.unionfh.com.