She graduated from Marion High School in 1956 and married Robert Eugene Barger on Dec. 5, 1958, in Marion.

She was a beloved wife and mother of two children, as well as a grandmother of five grandchildren and five great-grandchildren.

She was a homemaker, worked at Wal-Mart in Anna and also owned and operated a wholesale florist business, Carol Floral Supply, in Anna.

She loved quilting, reading, cooking, collecting antiques, working puzzles, singing and her family.  She was also a Christian and member of the congregation at Anna Heights Baptist Church.

She was preceded in death by her husband, Robert Barger of Anna; and by her parents, Samuel and Flora Trefts of Marion.

Private graveside services were held for the immediate family. 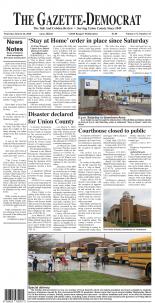