Mr. Jordan served for 22 years in the U.S. Marine Corps.

Burial will be in the Veterans Cemetery in Sorrento, Fla. 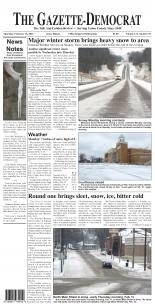