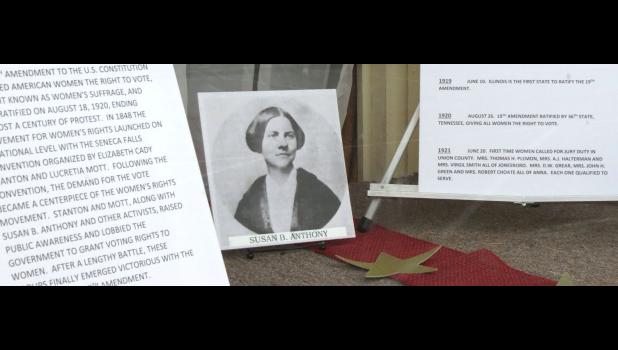 The Union County Historical and Genealogy Society is recognizing the 100th anniversary of the ratification of the 19th Amendment  to the U.S. Constitution, which gave women the right to vote.

Frances Swedlund, of Cobden, who is a member of the society’s board of directors, has designed a window exhibit celebrating the milestone, along with a small exhibit in the Union County Museum, including clothing from the era.

Members of the historical society have created a timeline specific to Illinois and Union County for the display.

The timeline highlights major events showcasing the area’s involvement in the fight to win the vote for women, as well as other milestones in an effort to create equality for women. The exhibit will be on display at least through September.

The Cobden area, primarily because of the eastern settlers who came early in the development of the area, has been known for its more liberal leanings toward the equal rights of women.

The Union County Woman’s Suffrage Association was organized in Cobden in 1869.

Mrs. Hannah Tracy Cutler practiced medicine in Cobden in 1870, while Dr. Mary DuBois registered her medical certificate in Union County in 1877 and practiced in Cobden.

In March 1877, Susan B. Anthony, the national champion of women’s rights including the right to vote, lectured in Cobden at Horticultural Hall.

Anthony was a friend of Dr. Mary DuBois and paid a visit to the DuBois home in Cobden.

In 1895, Mrs. L.T. Linnel and Mrs. J.B.B. Broadway were the first women elected to the Cobden School Board after Illinois in 1891 passed legislation giving women the right to vote in school elections.

The Illinois state legislature in 1913 gave women the right to vote in presidential elections.

Isabelle Goodrich Mitchell of Cobden noted in her diary that she cast her first vote for U.S. president Nov. 7, 1916.

Thirty-six states were needed to make the amendment a part of the U.S. Constitution. Tennessee became the 36th state to ratify the 19th Amendment on Aug. 26, 1920, giving women the right to vote and ending a struggle which began in 1848.

Isabelle Goodrich Mitchell noted in her diary of Nov. 2, 1920, that all of her family voted for Warren G. Harding and that Union County almost went Republican.

Circuit Judge William Butler of Cairo ordered a special jury in 1921 composed of six men and six women. This was the first time women served on a jury in Union County.

The Union County Museum is located in downtown Cobden at 117 S. Appleknocker.