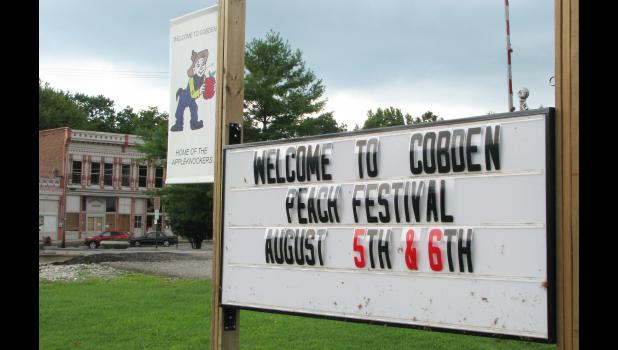 The 79th edition of the Cobden Peach Festival is planned Friday and Saturday, Aug. 5-6.

Most of the Peach Festival activities will be at the Cobden Community Park in Cobden. Activities begin at 5 p.m. each day. The park is located along Locust Street in the Union County village.

The Peach Festival is an annual community celebration of the local peach harvest which is sponsored by the Cobden Lions Club.

The Peach Festival is slated to feature a queen pageant, entertainment, rides, food, bingo, games (including the always popular spin and win game) and plenty of peaches, peaches and cream and homemade peach cobblers.

Free entertainment is planned on each night of the Peach Festival.

Fast Eddie's DJ and Karaoke will be featured from 7 p.m. to 9 p.m. Friday.

A Peach Festival parade is planned Saturday, Aug. 6. The parade is scheduled to step off at 4:30 p.m. The parade route traditionally has been through downtown Cobden.

The grand marshals for the parade will be the Cobden Junior High School baseball team. The team won an Illinois Class M baseball championship.

Parade units will be judged and cash awards will be presented.

Information about the parade is available at Cobden Village Hall and on the village's website at www. cobdenil.com.

Coronation of a 2016 Cobden Peach Festival queen on Saturday night will be one of the highlights of the event. Pageant activities also take place on Friday night.

Participants in the pageant must be 16 to 21 years of age and a resident of Union County. They must not have been married, had a marriage annulled or have had a child.

Scholarship money will be presented to the winners.

The pageant's director is Debbie Stroehlein.

The women's club also welcomes volunteers to work in the peaches and cream stand at the festival.

The Cobden Women's Club is a local organization which supports community activities.

The Union County Museum in downtown Cobden on Appleknocker Street plans to have special hours during the Cobden Peach Festival.

The museum plans to have a special exhibit titled "Vanished Views." The exhibit will feature photos from the 40-year collection of Pat Meller of Anna.

The display will feature over 100 images covering the Southern Illinois region of views that can no longer be seen.

Photos include people, events, railroad depots, ghost towns and other images from the past. The exhibit is scheduled to run through the end of October.

The shop by the museum will also be in operation and will feature recently stocked items.

The shop offers collectibles, glassware, fall merchandise and a variety of other decorative items.

Proceeds from the shop go toward the operation of the museum.

After the Peach Festival, the museum's normal hours are on Saturday and Sunday from 1 p.m. to 5 p.m.

For those who are visiting Cobden for the Peach Festival, the Union County village also offers unique shops and eating establishments, music venues and a number of nearby wineries.

An informational flyer which details Peach Festival activities, along with other places to visit in Cobden, will be available at most participating establishments.

For more information, contact the Village of Cobden at 893-2425 or visit the village's web page at www.cobdenil.com.