A cold case dating back for decades which involved a murder in Iowa and the discovery of a body in Union County is reported to have been solved.

The body of a Southern Illinois man connected to the case was found in the Cobden area.

The Council Bluffs, Iowa, Police Department issued a press release regarding the investigation. Council Bluffs is in southwest Iowa.

The press release, posted by the police department on social media, follows:

Narrative: Council Bluffs Police detectives have cleared the cold case homicide of Lee Rotatori, who was murdered in June 1982.

Rotatori, a resident of Nunica, Michigan, had just started a job at Jennie Edmundson Hospital and had been staying at the Best Western Frontier Hotel, for several nights, while looking for a permanent place to live.

When she did not show up for work on the morning of June 25, 1982, her boss asked the hotel staff to check on her and her deceased body was discovered inside her rented room.

Rotatori died from a single stab wound and there was evidence of a sexual assault. No suspects were identified during the initial investigation.

In 2001, the evidence collected in 1982 was resubmitted to the State of Iowa Division of Criminal Investigation (DCI) Lab for examination.

Advances in forensic technology revealed the presence of a male DNA profiled.

When entered into the State and Federal DNA databases, there was not a match for this DNA. The DCI Lab would periodically check this unknown DNA over the years, without ever getting any matches.

In February 2021, researchers from Parabon and ES Genealogy, who examined familial relationships, concluded that Thomas O. Freeman, of West Frankfort, Illinois, was the source of the suspect DNA.

A sample of Freeman’s daughter’s DNA was subsequently analyzed by the Iowa DCI Lab, which confirmed that there was a parent/child relationship between the DNA found at the scene of Rotatori’s murder and Freeman’s daughter.

Further investigation revealed that Thomas Freeman was also the victim of a murder.

On October 30, 1982, Freeman’s decomposed body was found buried in a shallow grave near Cobden, Illinois.

Freeman had been shot multiple times; he was 35 years old at the time of his death.  It was reported that he had been dead for about three months before his body was discovered. Freeman’s killer was never identified.

Council Bluffs investigators are currently working with the Illinois State Police to determine if Freeman’s murder was somehow linked to his involvement in Rotatori’s death.

An article about the discovery of a body in Union County appeared on page one of The Gazette-Democrat on Thursday, Nov. 4, 1982.

The article reported that  “the badly decomposed body of an apparent homicide victim was discovered by hunters in northern Union County over the weekend.” The body was found in a wooded area approximately five miles northeast of Cobden.

Authorities found what appeared to be the body of a 25- to 35-year-old white male. The body had been at the location for approximately three to six months.

A subsequent article which appeared in the Nov. 11, 1982, issue of The Gazette-Democrat reported that the body which was found near Cobden “was identified as that of Thomas Oscar Freeman, 35, of West Frankfort. 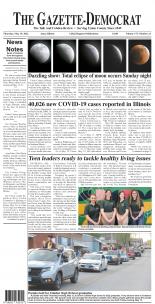