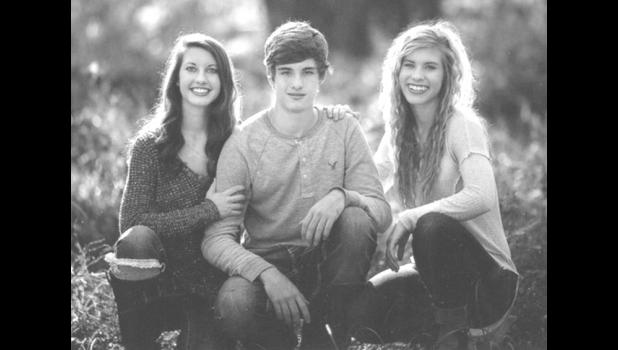 Having siblings can be a challenge and a blessing and that’s no different for the Barringer triplets of Union County.

Eli, Brenley and Ashley Barringer celebrated their 16th birthday on Jan. 21, a huge milestone for any teenager.

Eli, the only boy of the three, is technically the oldest. Brenley was born second and Ashley is the baby of the three.

Their mother, Rebecca Mize, says triplets don’t run in the family. They were a product of in vitro fertilization.

“It was the farthest thing from my mind,” Rebecca said about having triplets.

“I would rather have three than none though. I’m very blessed.”

They were born at 32 weeks, all healthy, all weighing about four pounds.

The triplets, who are sophomores at Anna-Jonesboro Community High School, attended Lick Creek Elementary School for most of their lives and were always together.

Though they spend a lot of time together, their personalities are unique.

“We’ve always been different from each other,” Brenley said.

“We used to always be dressed alike, and so now we try to dress totally different,” Ashley said.

They also have different interests.

“I like to play sports and I like to be on the farm a lot,” Brenley said.

Ashley said, “I’m kind of more of the study nerd.”

“I just like being outside and on the farm,” Eli said.

The triplets have an older brother, Garrett, who is 18.

Garrett took advantage of being the older brother, like sitting in the front seat, but just because he is older doesn’t mean he isn’t close with the younger three.

“I feel like I’m closer with him than anyone else,” Brenley said.

Of course, the triplets said there are some downfalls, like sharing a birthday and gifts, especially so close to Christmas.

Also, going to a small school like Lick Creek meant they had a lot of the same friends.

When they started attending high school, it was the first time they hadn’t been in a class together.

Though they are sophomores, they already have ideas about their future.

Brenley wants to become an occupational therapist or a registered nurse. She also would like to attend Murray State University.

Ashley wants to go into nursing or to medical school. She would like to stay closer to home.

Like his sister, Eli would like to stay close to home as well. He wants to be an equipment operator or mechanical engineer.

Each triplet has different characteristics and roles.

The siblings said Ashley is the caretaker, but when they were younger, she was always the tattletale.

Eli is protective of the girls, but was also the instigator, along with Brenley.

Rebecca said sometimes the girls’ personalities have flip-flopped over the years, with one more reserved and the other being a social butterfly.

The mother of four said the biggest challenge raising triplets, along with a toddler, was the sibling rivalry.

“They would always fight. They were always competing for everything,” Rebecca said.

The siblings are asked often about being triplets and they don’t mind.

“I think it’s cool that people are interested,” Brenley said.

At the end of the day, they see the many benefits of being a triplet.

“You learn how to share and get along,” Ashley said,

“There is never a dull moment. It’s never boring and you always have someone,” Eli said.

The best advice Rebecca had for parents was to “enjoy it because it goes by so fast. Savor the moment.”