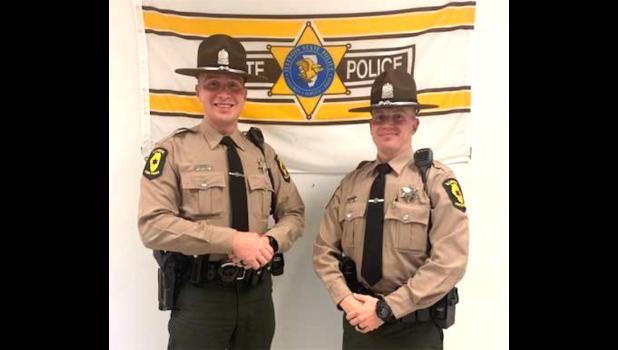 The new District 22 troopers are Tyler Barber and Robert Kraemer. District 22 has its headquarters in Ullin.

The officers have completed the field training program in the district and are now assigned to District 22 patrol.

The field training program allowed the officers to implement knowledge and skills they learned in the academy while working with a field training officer.

Trooper Barber is a graduate of Carterville High School and John A. Logan College at Carterville.

Barber worked one year as a dispatcher and three and a half years as a patrol officer for the Marion Police Department.

Trooper Kraemer is a graduate of Goreville High School and John A. Logan College.

Prior to his employment with the Illinois State Police, Kraemer worked as a deputy for one year in Dekalb County, Georgia, and four and a half years as a patrol officer for the Marion Police Department.

While in Marion, Kraemer was a K9 handler for three years.