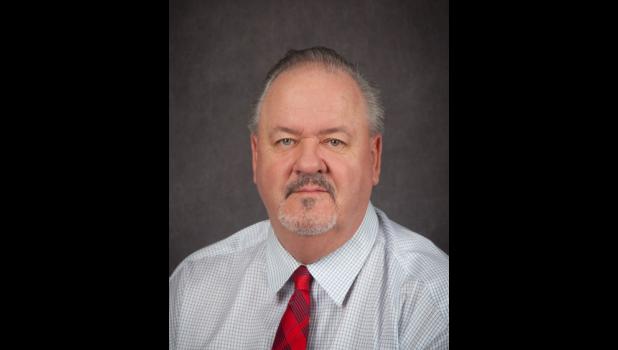 Mike Hanson has been the principal at Shawnee Junior-Senior High School in Wolf Lake for the past six years. In mid-June of this year, he will retire.

Hanson, of Grand Tower, graduated from Shawnee High School in 1973. However, like many graduates who are tired of school, he swore he would never return.

“I was passionate about never coming back here, but that just proves that one never knows the future,” Hanson said.

“Life will take you in several directions. Some you’ll forge yourself, and some will be fashioned by circumstance.”

Instead of going to school to be a teacher right after he graduated, Hanson decided to pursue another passion: music.

He traveled as a road musician for 20 years as a drummer, playing with local bands right out of high school.

Eventually, he became a recording and road musician with RCA artist Leon Everette, who had several top 10 records.

After a few years, he began touring with another RCA artist, Earl Thomas Conley.

Hanson said they toured all over the United States, Canada, England and the Bahamas, performing at the Grand Ole Opry and many large venues, on radio and television.

Hanson reminisced on a concert Conley put on every year to raise money for a college scholarship fund in his hometown of Portsmouth, Ohio.

He said they would hire an up-and-coming act out of Nashville to open for Earl. Some of those opening acts became very successful, including Garth Brooks, Alan Jackson and Mary Chapin Carpenter.

“I didn’t even get out of the bus to go see him,” Hanson said about Garth Brooks.

After touring with bands for several years, Hanson’s priorities began to change.

“I had a wife and two sons and I was spending a lot of time away from them,” Hanson said.

“There are a lot of perks to that life, but there are only 24 hours in a day.”

When he started looking into getting off the road and doing something else, he remembered his passion for athletics.

Hanson played sports while in high school and coached both of his boys.

“I decided to go back to college to get my degree to be a teacher, that way I could coach,” Hanson said.

At age 40, Hanson enrolled in John A. Logan College at Carterville and received an associate of science degree. Ironically, Hanson attended Logan at the same time as his sons.

He then attended Southern Illinois University Carbondale and graduated with a bachelor’s degree in English. He later went on to receive his master’s degree in administration at William Woods University in Fulton, Mo.

Hanson had already been coaching two sports for a few years before he started work as an English teacher in 2000.

He started coaching junior high baseball at Shawnee in 1991.

In his first year of coaching, Shawnee won the state tournament. To get to that state tournament, he had to take a plane from a show that took place in California with his band.

During Hanson’s first year teaching at Shawnee, he was already coaching two sports, but was also named the athletic director.

“(Becoming) a principal was a move into another challenging area of education where I could, no doubt, use my prior experience as an English teacher. I try to lead by consensus – always bringing in those who have a stake in the situation for advice and analysis, but I will make the final decision,” Hanson said.

Hanson said the most rewarding part for him was the relationships with students, especially those whom he has coached.

“The alliances you forge and the talent you see...we had success together and failure together,” he said.

His retirement plans are simple. “I really don’t want to have to make any decisions,” he said.

He plans on coming back and being a substitute teacher.

Though Hanson swore he would never go back to Shawnee, he’s never regretted anything.

“Where better to go than where you know.”