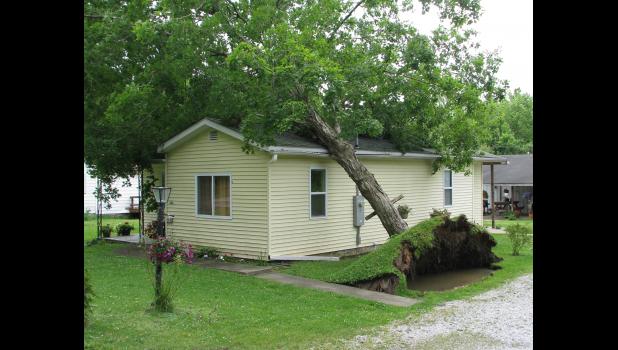 The National Weather Service office in Paducah reported on its website that multiple rounds of severe thunderstorms impacted the Middle Mississippi Valley on the first day of the Memorial Day holiday weekend.

Many observations of large hail and damaging winds were reported throughout the region, including wind speeds upwards of 70 to 80 miles per hour and some hailstones measuring golf ball sized and slightly higher.

The weather service reported there were multiple bowing segments in the storm systems which impacted the region with damaging winds as the main impact. Each one seemed to develop further south than the one prior.

Multiple individual cells and clusters also developed, especially early on in the event.

The weather service reported that the brunt of the storms focused across Southeast Missouri into much of Southern Illinois and Western Kentucky.

Multiple rounds of storms over the same locations also resulted in some flooding issues, requiring the issuance of a few flash flood warnings as well.

The weather service reported that widespread wind damage had occurred in Jonesboro.

A garage was reported to have sustained major damage when a tree fell on it. Numerous large trees were downed by strong winds. A number of utility poles were reported to have been broken, which resulted in power outages.

A large tree and numerous tree limbs were reported down near Union County Hospital in Anna.

A large tree was seen Saturday night which had fallen on a house along Spring Street in Anna.

The First Baptist Church in Jonesboro reported that it cancelled services on Sunday morning due to the power outage.