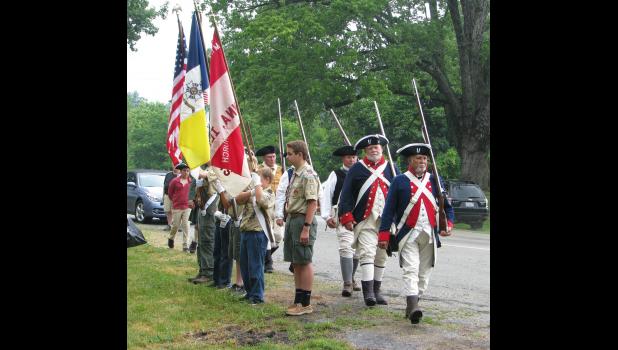 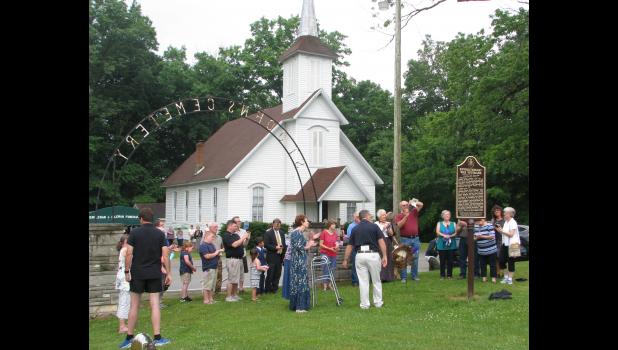 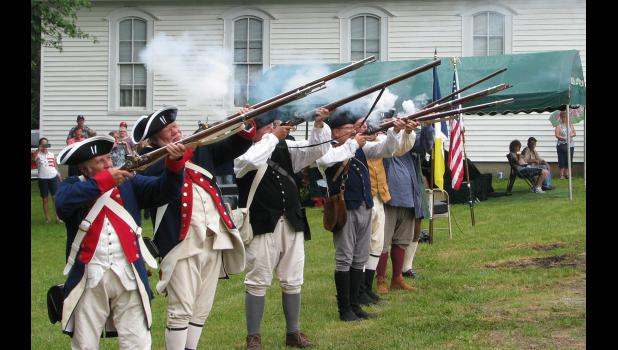 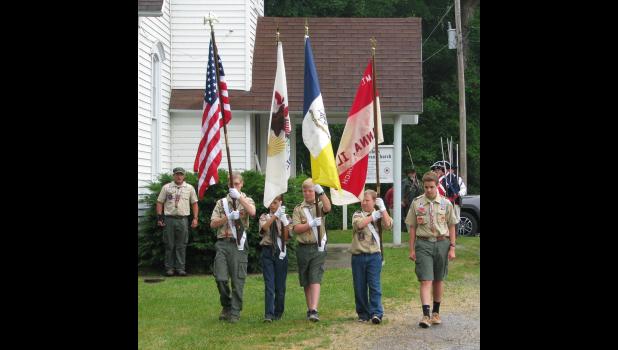 Four patriots who served during the Revolutionary War were honored during a special ceremony which was held on a rainy Saturday afternoon at the St. John’s Lutheran Church Cemetery near Dongola.

The cemetery is located west of Dongola, across the road from its namesake church.

At about the time the ceremony was scheduled to begin, a brief downpour fell as a thunderstorm passed over.

The cemetery in Union County is the final resting place for many early pioneers of Illinois settlement, including four Revolutionary War veterans.

Last Saturday afternoon, a new plaque which is on display at the cemetery was unveiled during a ceremony sponsored by the Long Knives Chapter of the Illinois Society Sons of the American Revolution.

The Long Knives Chapter has members from the southern 15 counties in Illinois. The 66 members of the chapter all have documented connections to ancestors who served during the American Revolution.

Dick Chamblin of Decatur is the president of the Illinois Society Sons of the American Revolution. Chamblin was one of the speakers at the ceremony.

Chamblin said those who gathered for the ceremony were honoring four soldiers who “defeated the British to establish a nation of free men and women.”

“These men served in a citizen army and many were untrained in the accepted art of battle. They faced a highly trained army.

“The colonial soldier was fighting for a better way of life for himself and his family...he was fighting to create a nation free from the tyranny of the English king.

“Our patriots were fighting to create a nation that allowed citizens to participate in their government.

“They were successful...and we can never honor them enough. God bless our patriots and God  bless America.”

The program for the ceremony follows:

Pledge of Allegiance, led by Will Smiley, Boy Scout Troop 44.

Plaque unveiling, Michael Spinks, assisted by patriots’ relatives (a number of the patriots’ descendants were in attendance at the ceremony).

Biographies of each of the four veterans were shared in the program for the ceremony.

He volunteered for service in the fall of 1776 and served as a private under Capt. Henry Whitesell and Col. Alexander Martin.

During this period, under Gen. Rutherford, he campaigned in what was then referred to as the Cherokee Nation and was engaged in several skirmishes with British Loyalists.

Clapp went on to serve again with Whitesell during another period of service, and with Capt. Eli Newland and Col. William O’Neal following the battle of Guilford Courthouse.

After his discharge from service, Clapp moved to Union County. He died on Aug. 15, 1841.

As a private in the 4th Company, 3rd Battalion, Northampton County Militia in 1778, he served under Capt. John Horner and Col. Michael Pobst.

In 1780, he served again as a private in the Northampton County Militia in the 4th Company, 6th Battalion, until Oct. 26.

Christopher Lyerle was born in 1763 in Virginia.

He enlisted during the year 1780 for a period of 18 months in Col. McRea’s 10th North Carolina Regiment.

Peter Meisenheimer was born in Philadelphia County, Pa., in 1755.

He volunteered for service in 1781 and served as a private in Mecklenburg County, N.C., for the North Carolina Continental Line under Capt. John Steirns.

Meisenheimer went on to serve in Col. Francis Lock’s regiment at the Haw River, Buffalo Creek and Rock River in Montgomery County.

Following his discharge from service, he moved to Union County. He died in 1835.

Organizers of the ceremony voiced their appreciation for help and support which were provided by the Daniel Chapman Chapter NSDAR, Rendleman & Hileman Funeral Home, St. John’s Lutheran Church, the Union County Sheriff’s Office and the Dongola Community Center.

A reception was held at the Dongola Community Center following the ceremony.