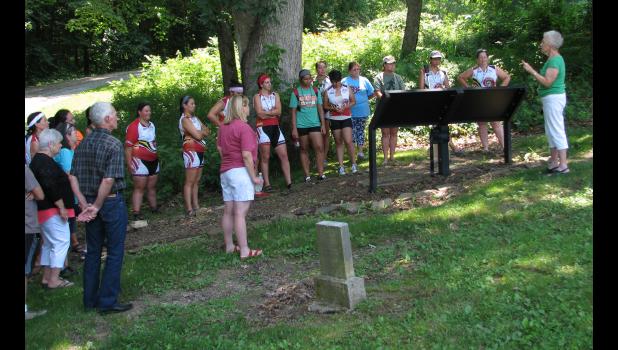 Cyclists who are participating in the 2018 Remember the Removal Bike Ride were guests last Sunday at the landmark Camp Ground Church near Anna.

The cyclists are in the midst of a three-week journey along the northern route of the Trail of Tears.

On June 3, the cyclists began a three-week journey which will span nearly 950 miles.

The Illinois Chapter of the Trail of Tears Association hosted the Remember the Removal cyclists in the Camp Ground Church fellowship hall Sunday afternoon.

The association served lunch to 18 riders and their support staff, as well as chapter members who were in attendance.

During the stop in Union County, local resident Sandra Boaz shared some of  the Camp Ground area’s history with the Remember the Removal participants.

Boaz is a member of Camp Ground Church and is president of the Illinois chapter of the Trail of Tears Association.

Camp Ground, and its adjacent cemetery, are located along Tunnel Lane, east of Anna and close to Interstate 57.

The Remember the Removal cyclists began their ride earlier this month in New Echota, Ga.

While commemorating the 180th anniversary of the Trail of Tears, cyclists will travel through seven states before concluding in Tahlequah, Okla., on June 21.

The riders are scheduled to make stops at museums, grave sites, national parks, churches and other historic sites.

The original Remember the Removal Bike Ride was held in 1984, and the leadership program resumed as an annual ride in 2009.

Participants are learning about  the Cherokee Nation’s history, language and culture and are getting a glimpse of the hardships their ancestors faced while making the journey on foot.

Starting in 1838, Cherokees were rounded up and forced from their homes in Georgia, Tennessee and other southeastern states to the Cherokee Nation’s current capital in Tahlequah.

Of approximately 16,000 Cherokees who were forced to make the journey to Indian Territory, about 4,000 died from disease, starvation and exposure to the elements.

During the bitter winter of 1838-1839, more than 3,000 Cherokee were reported to have camped in the area where the Camp Ground Church and Cemetery now stand.

The Remember the Removal Bike Ride can be followed at http://www.facebook.com/removal.ride and at www.remembertheremoval.cherokee.org. On Twitter and Instagram, search for the hashtags #RTR2018 and #WeRemember.

The cyclists are scheduled to travel through Georgia, Tennessee, Kentucky, Illinois, Missouri, Arkansas and Oklahoma.