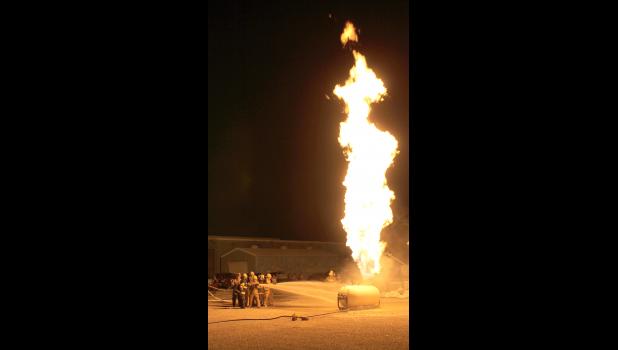 The Anna Fire Department hosted the training session, which was held on the grounds of the former Transcraft plant. The site is located in east Anna.

Firefighters who participated in the training included personnel from the host department, as well as from Cobden, Cypress, Dongola, Johnston City and Tamms.

The training lasted from 6 p.m. until 10 p.m. The session began with classroom training at the Anna Fire Department and then moved to the outdoor location.

Midwestern Propane Gas of Anna provided the fuel that was used in the training. Nearly 500 gallons of propane were burned.

Anna Fire Chief Gary Rider said the training gave firefighters an opportunity to familiarize themselves with the techniques that would be needed to extinguish a propane blaze.