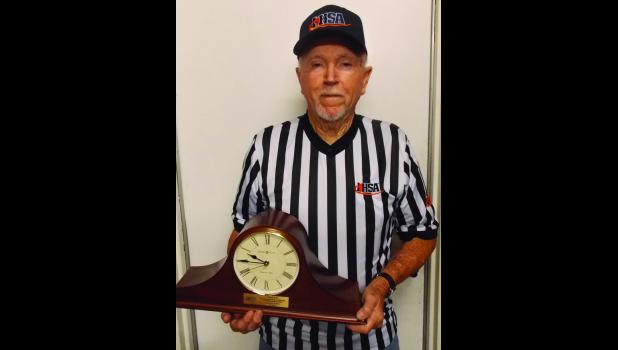 Palmer honored for 60 years of service as school sports official

Ken Palmer has definitely made his mark in baseball and basketball officiating.

The Dongola resident was recently honored by the Illinois High School Assocation for 60 years of officiating basketball and baseball.

“I was shocked,” said Palmer, 80, who was awarded a clock for his lengthy time officiating in Illinois  since 1959. He graduated from high school  in 1957.

He also officiates softball and has been doing that for 20 years.

Palmer retired from the Choate Mental Health and Developmental Center in Anna 30 years ago.

He said he’s not the oldest official calling basketball and he knows of one up in the northern part of the state who’s 83 years old.

“There’s not too many old-timers still at it,” he said. “A lot of them have quit.”

Times have changed since he began officiating basketball.

“They let more contact go now than when I started,” Palmer said. “Touch somebody back then and it was a foul.”

He notes that there is one main thing that basketball coaches what from officials.

“As long as you’re consistent, a coach won’t holler either way,” Palmer said.
“But fans are worse now than way back when, they get on everybody now.”

He likes high school officiating because of having three officials roam the floor and they don’t have to run as much.

“Smaller junior high schools are tougher because they only have  two officials,” he said.

With his age there is a somewhat of a small drawback.

“It’s harder to get in shape now,” he said. “Starting in September, I will start running to begin getting in shape.”

Because of the pandemic, Palmer missed 45 baseball dates this past spring. With the continued spread of the virus it doesn’t look good for the future.

“It doesn’t sound too promising at all for a season,” he noted. “But I still enjoy it. Hopefully, I’ll be officiating 61 years if we have a season.”