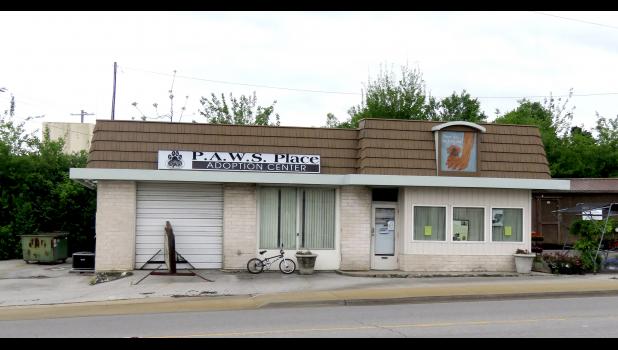 Though it’s recently taken a very large blow in the loss of longtime facility manager Penny South, PAWS Place Adoption Center in Anna hasn’t give up on its mission to provide a safe place for animals and a chance to find a loving, permanent home.

PAWS, which stands for Pets Are Worth Saving, is a no-kill animal shelter that has been serving the community for 23 years, and in its current building at 139 E. Vienna St. since August 2001.

The shelter was founded by a small group of women who worked at Union County Animal Control.

Karee Sweitzer, one of the founding members, said they were eating lunch at Dairy Queen in Anna and looked across to the building where they are now located and asked, “Why don’t we start a no-kill?”

Sweitzer said that PAWS was the first no-kill shelter in Southern Illinois, though it is no longer the largest. The shelter is a non-profit and receives no government assistance. All funding is provided by donations.

The founders of PAWS still run the organization, with the help of about eight “almost daily” volunteers and the help of many others.

Those volunteers make all the difference at PAWS, Sweitzer explained.

Earlier this year, Penny South, the facility manager of over 16 years, was hospitalized with illness. Sweitzer, who manages the PAWS 2nd Chance Resale Shop four days a week, was with South for the duration of her stay.

“That was my best friend,” Sweitzer said. “Penny was PAWS.”

The situation left two central roles to the organization vacant.

But Sweitzer said that the remainder of the PAWS staff and volunteers “didn’t miss a beat. These guys, like you would not believe, pulled together.”

However, more volunteers are always in need to maintain the facility and care for the animals. “Come in and love them,” Sweitzer said.

Volunteers can clean, walk the dogs, work the resale shop, give baths and more. Sweitzer stressed the need for volunteers to learn how to adopt animals out.

Donations are always welcome, with a particular need of Dry Purina Puppy Chow.

Many of the pets available for adoption are posted on the PAWS Facebook page and website at pawspaws.org. Those interested in adopting should fill out the application online or in person. The application will be reviewed, and if accepted, the new owner will pay the fee and take home their pet.

The adoption process can last as a little as a day, but is often completed the next day. PAWS reserves the right to perform a home visit to ensure animals will be well-cared for.

Sweitzer said that though mistakes happen, she is very happy with their screening process. She said their track record is “really good.”

Sweitzer also expressed pride in the work PAWS has done to provide for homeless animals in the community. “There’s 6,000-plus we’ve sent home.”

She described the state in which many of the animals arrive at the shelter. Some come because their owner has passed away or the family can’t care for them. “Most of the time, [they come] in very bad shape.”

Mona Lisa, a pug who spends her days keeping Sweitzer company at the resale shop, is a clear example. When she was found, she was covered in fleas, unable to walk and could hardly move. The PAWS staff worked with her tirelessly and now, years later, no lasting damage can be seen.

Due to their no-kill status, the shelter takes in animals they are aware may never be adopted out. The animals are cared for all day, every day of the year. “We commit to them for life. But that’s all they ask for, a little love and kindness.”

Because of the attachments that form from working with the animals regularly, many of the staff have adopted more than one into their own homes.

Sweitzer said that with the work PAWS does comes “a lot of heartache, but, oh my God, so much joy.”

Since December 2015, PAWS has been raising money to build a new, larger facility than the current 1,100 square foot building.

The plans for the new building include runs for the dogs, a quarantine area to contain animal illnesses, puppy and cat intake rooms, a free-roaming feline room, a community area and more.

“It seems like a long way away,” Sweitzer said, “but we’re getting there.”

Donations of time and building materials have been given as well, potentially chipping away at the cost.

Several fundraisers this year are planned to help out with that goal, as well as maintain the current facility and care for the animals.

A plant sale is running now at the shelter. Stop by during regular hours, from 1 p.m. to 4 p.m. Tuesday through Saturday, and until 6 p.m. on Fridays to see what is available.

Alto Vineyards in Alto Pass plans to host the fifth annual Dawg Daze of Summer on Sunday, June 11 from noon to 7 p.m. The event has raised over $30,000 in previous years for animal rescue organizations in the area. The radio station 100.7 KGMO is slated to broadcast live and bands will play for the rest of the afternoon. Adults are $10 per person and children under 12 get in free.

The shelter hosts an auction each year in November with a number of donated items from the community up for bid. The auction has been held at Blue Sky Winery for several years. More information will be available later this year.

Raffle tickets are available for a quilt created and donated by Jane Nimmo and Sue Ann Zimmerman. The winner of the quilt will be announced at the November auction.

Funds are also raised for the shelter at the PAWS 2nd Chance Resale Shop, which is located at 101 Springfield Ave. in Anna. The shop opened in Nov. 2013 and sells 100 percent donated items, which range from clothes and accessories to furniture and household items to the occasional car or motorcycle.

Sweitzer said that she and the many others will continue to help animals in need in accordance with the late Penny South’s motto, “I can’t save ‘em all, but I can save the one that’s in front of me today.”