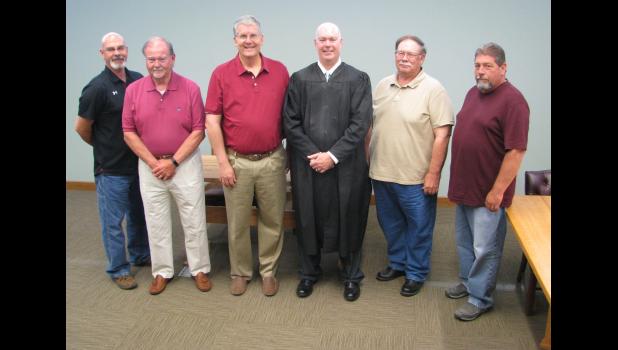 A new Union County commissioner has been appointed and taken the oath of office.

The ceremony was held at the Union County Courthouse in Jonesboro. The oath of office was administered by Union County Presiding Circuit Judge Mark Boie.

Gould, of Anna, filled a vacancy on the county board which was created by resignation of Alex Foeller of Anna. Foeller resigned from the board, effective May 11.

The oath of office for the new commissioner was administered following a regular meeting of the county board which was held Friday morning.

Gould is a Republican, as was Foeller. Gould is the retired president/CEO of the Anna-Jonesboro National Bank.

The new commissioner’s wife, Sondra, and daughter, Erin, stood by his side when the oath of office was administered. The Goulds also have two grown sons. Gould is active in a variety of community and church activities.

As a county commissioner, Gould said he will work to “continue to make Union County a place we can all be proud to call our home and raise our families.

“I will continue to address the important issues that will face us now and in the upcoming years.”

Gould said he will use his business and management talents to continue to work to improve the county.

He will be a candidate for the county board in the November general election.

Gould’s appointment as a commissioner was formally approved by the county board during its meeting on Friday morning.

County board chairman Bobby Toler Jr. said Gould’s appointment to the post had been recommended by the Union County Republican party central committee.

In other business at last Friday’s meeting:

The county approved a declaration designating a number of pieces of Union County Highway Department equipment as surplus property. The items, which will be sold at auction, have been deemed as obsolete or no longer of use to the highway department.

Graff is superintendent of a region which includes Union, Alexander, Jackson, Perry and Pulaski counties. One of the regional superintendent’s offices is located in Anna.

Graff shared information about training for bus drivers, renewal of teachers’ licenses and services for students

The regional superintendent also voiced concerns about an ongoing teacher shortage, particularly in the field of special education.

The funds are generated by a county hotel/motel/lodging tax. A committee appointed by the county board makes recommendations to the commissioners regarding awarding of the funds.

Funds which were approved by the county board included:

The funds will be utilized to help promote local tourism efforts.