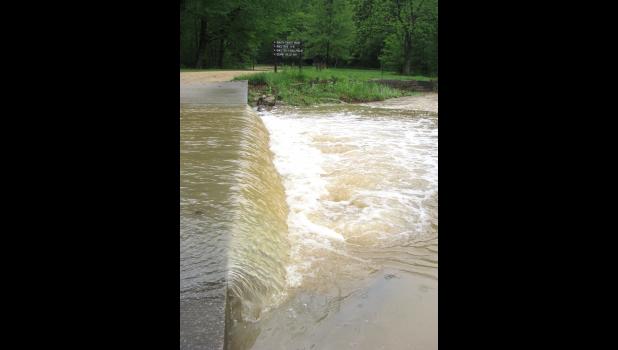 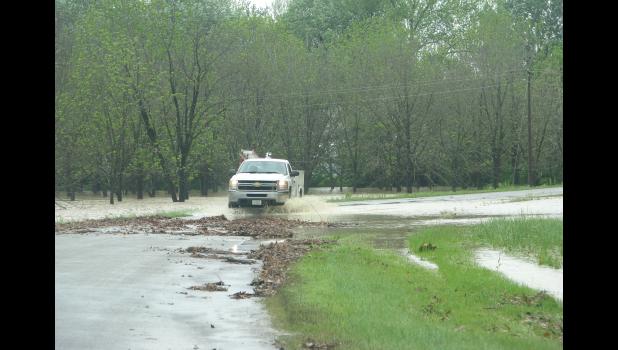 Major flooding in forecast for region

Union County officials were hoping for the best as major flood conditions were in the forecast this week for the Mississippi and Big Muddy rivers in Southern Illinois.

The hopeful outlook came even as forecasts were calling for the possibility of more heavy rain on Wednesday and Thursday, today.

The National Weather Service office in Paducah issued a special weather statement early this week which was alerting area residents to the possibility of “more rainfall heading into the region.”

“Another strong, slow-moving storm system will bring more moderate to heavy rainfall to the region Wednesday through Thursday,” the weather service office posted on its website.

The forecast was calling for 1 to 3 inches of rain, with the heaviest rains expected over areas from Perryville, Missouri, through Pinckneyville, Mt. Vernon and Fairfield in Southern Illinois.

Much of the rain was expected to fall from Wednesday night through Thursday morning, today.

“While these rainfall amounts pale in comparison to the heavy rains that fell over the weekend, they will serve to aggravate existing flooding and possibly lead to new flooding problems,” the weather service advised.

“Many river forecasts across the area will be impacted, at least with a prolonged flood wave, if not new or higher crests.”

More Than 11 Inches of Rain

The possibility of even more rain falling came after the Union County area received more than 11 inches of precipitation during the period of April 26 through April 30.

The heavy rain caused river levels to rise significantly throughout the region. The weather service issued flood warnings for many of the area’s rivers.

A flood warning was in effect for the Mississippi River at Cape Girardeau and Thebes. The warning included Union County.

The weather service stated at midday on Tuesday that river flood crests at both Cape Girardeau and Thebes remained on track.

At 48.9 feet, the flood would exceed the highest stage on record, the weather service reported.

The weather service reported that the stage of the Big Muddy River at Murphysboro was 36.4 feet at 11:30 a.m. Tuesday. Flood stage is 22.0 feet.

Major flooding was occurring on the Big Muddy, and was expected to continue.

The river was expected to continue rising to near 39.8 feet by early Thursday morning, today, and then begin falling.

The past week’s downpours swamped streets and roads throughout the Union County area.

The Union County Sheriff’s Office in Jonesboro reported that as of Sunday afternoon, there had been no evacuations as a result of flooding.

Union County Sheriff Scott Harvel said in an updated report on Tuesday morning that no evacuations had been reported due to high water.

The sheriff’s office reported Saturday and Sunday mornings that parts of some roads in the county were either under water or washed out.

Roads which were impacted by the flooding included Morgan School Road between Jonesboro and Ware, Refuge Road near Ware, Kaolin Road between Anna and Cobden, Belcher Road near Ware, and Kornthal Church Road and Old Cape Road, both south of Jonesboro. Fox Hollow Road in northeastern Union County was reported to have been washed out.

Sheriff Harvel said that as of Tuesday morning, Old Cape Road, which is between Jonesboro and Reynoldsville, was the only road which remained closed due to high water.

Harvel said that water levels had dropped in many locations on Tuesday, which was sunny and mild.

However, officials were concerned about the possibility of more rain falling on Wednesday and Thursday. Officials are hoping that they do not see a replay of flood conditions which occurred in the area during December 2015 and January 2016.

Officials in the Shawnee School District also were keeping a close eye on the flood situation.

The district is located in river bottomland areas in Union, Jackson and Alexander counties.

Approximately 20 of the district’s students could not make it to school early this week due to flooding. In some locations in the district, students have to travel by boat during high waters.

The warnings were issued by the National Weather Service office in Paducah.

Numerous reports of flash flooding in the region had been received early Saturday morning, the weather service reported.

“Some major roads in the warning area have been closed in spots,” the weather service stated.

A lane of Route 13 in Carbondale was closed due to flooding. Water rescues were reported in Herrin, where some roads were impassable.