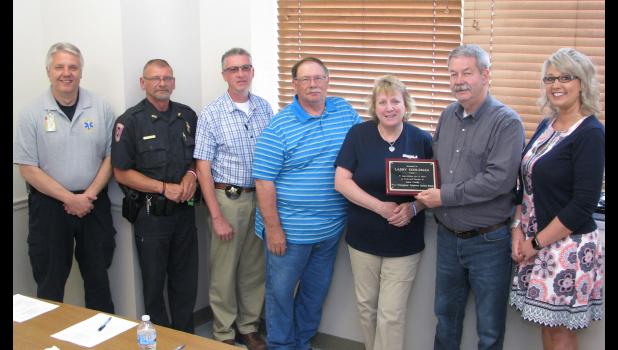 The Union County Emergency Telephone System (911) Board has honored the long-time dedicated service and memory of Larry Eddleman of Dongola.

Eddleman served on the 911/emergency telephone system board for 14 years, from 2004 to 2018. During Eddleman’s tenure on the board, he served as the financial officer for 12 years, from 2006 to 2018. He supported the system’s transition from Legacy 911 to Next Generation 911, and the move of the radio system from wide band to narrow band. He also served the citizens of Dongola on the Union County community’s fire department for 48 years.

During a ceremony which was held Wednesday, May 2, at the Union County Sheriff’s Office in Jonesboro, a plaque honoring Eddleman was presented to his wife, Kim, by the 911 Board.