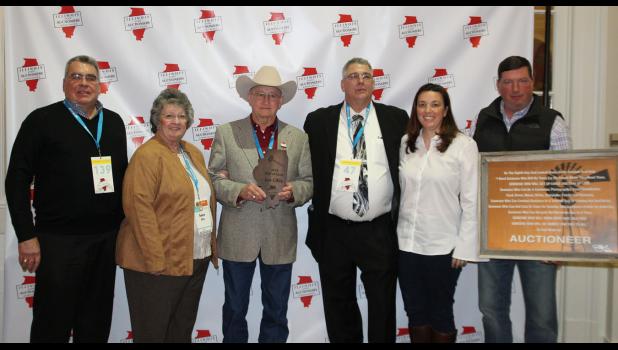 Canning shared the following presentation in honor of Ollis:

Joe Ollis was raised on a small acreage farm with hogs and cattle. Joe helped his grandfather every chance he got. He would pick corn and attended cattle auctions with his grandpa.

Joe joined the Army and enlisted from 1960 to 1962 and also worked at a local bank for two years. Joe then worked 23 years for Ozark Airlines which was bought out by TWA.

In 1980, Joe decided to attend the Missouri Auction School and received his TN apprentice auctioneer license. One person stood behind him in this decision to become an auctioneer and has been behind him ever since and in 1981 Joe received his TN auctioneers license and worked part-time with Robertson County Real Estate & Auction and Clive Anderson Auction Co. until 1986.

In 1986, Joe moved to Illinois to start his own auction company. A few years later, he opened a real estate company. In 1990, he built a new office and auction center. After 25-plus years in the auction business, Joe retired and sold his auction company in 2007.

Throughout his career, Joe has had many accomplishments such as serving on the ISAA Board of Directors, bid calling contest committee and a local real estate board, conducting several charity auctions and being named the 1990 ISAA Illinois state champion auctioneer.

Together, Joe and his wife, Gwen, have created a successful auction company and life together. They have two children, Bruce and Tracy, and are now enjoying the fruits of their labor in retirement.