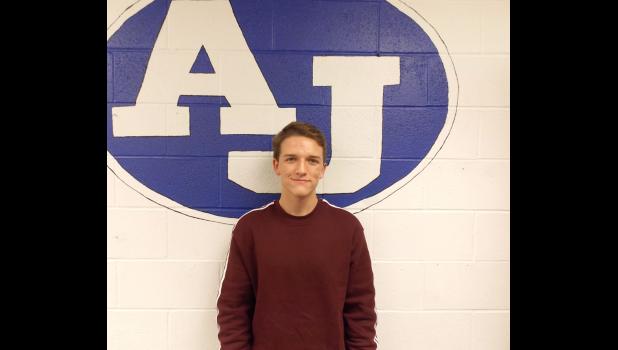 For the first time in over 20 years, an Anna-Jonesboro Community High School student will be headed to the Ivy League.

Senior Bryce Massey has officially been accepted into Brown University in Providence, R.I., as part of the university’s Early Decision Program.

The program allows first-year applicants to apply for admission to Brown in the fall of their senior year and receive an admission decision in mid-December.

Massey had previously studied human anatomy and physiology at Brown during  his freshman year though their “Summer@Brown” program.

A key feature that attracted Massey to Brown over other Ivy League schools is its open curriculum.

Where most universities require all students to take an array of general studies classes, Brown has no core curriculum requirements that students must complete in order to graduate.

This gives students greater freedom to shape the direction of their education.

“Brown sort of views any kind of requirement as almost an infringement on your academic liberty,” said Massey. “It’s entirely self-directed.”

In addition to its unique approach to curriculum, Massey was also attracted to the history of Brown and the culture of the region.

“I like that it’s been a progressive area that has encouraged asking difficult questions, and views academia as a conduit to liberation,” said Massey.

Prior to his initial visit his freshman year, Massey looked toward a possible future in medical school.

But he now has interests in perusing a study regimen focusing on the intersection of language and mathematics.

As part of his own personal independent studies, Massey spent the summer between his sophomore and junior years studying pure mathematics with Sally Casey, a math teacher at Dongola School.

“It gave me a firm foundation in mathematics and it also reinforced a love for it,” said Massey.

“In learning how to manipulate equations, it wasn’t just memorization and doing, but rather it was more like art. I found it really inherent and intuitive, and I equate it to a language because I love studying languages.”

Massey’s study of language arts took place both in and out of the classroom as well.

“Our language department here is awesome, they’ve influenced me so much,” said Massey.

“Señiora Darmour-Paul met with me over summers to just practice and speak Spanish with me. And right now Señiora Hutchings is teaching me Latin.”

And if that wasn’t enough independent foreign language study, for the past eight months, Massey has been taking lessons in Mandarin on Sundays with Jessica, the owner at Kings Wok in Anna.

Massey’s career goals are no less ambitious than his academic pursuits.

“I’d like to go into intelligence, so that could be CIA, FBI, the UN or even private intelligence agencies,” said Massey.

“I would really like to find this intersectional ground where I can utilize skills of logic an analysis and pretty mathematical things. And of course with a firm foundation in statistics, I could understand, perhaps, some trend that is occurring in a country.”

With this career in mind, Massey envisions himself in foreign countries, working for the greater good on an international level.

His parents are Dr. Paige and John Maginel of Dongola and Ron Massey of Anna.

His grandparents are Jim and Christine Helm of Dongola, Carl Massey of Anna and Dr. Cal Maginel of Anna.

He has two siblings, Henry Maginel of Dongola and Morgan Massey of Raleigh, N.C.