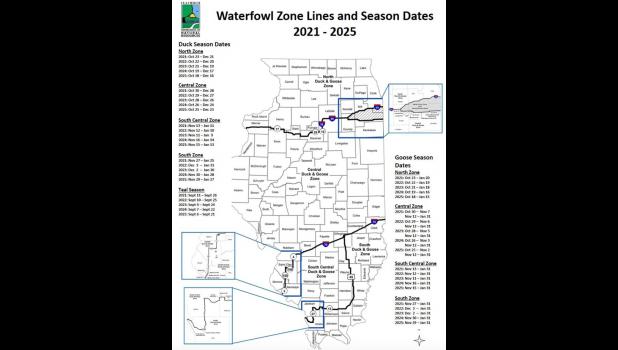 The Illinois Department of Natural Resources, IDNR, on July 8 announced that it has  selected season dates and submitted waterfowl hunting zone lines for 2021-2025 to the U.S. Fish and Wildlife Service, USFWS.

The 2021-2025 hunting seasons regulations were developed based on a thorough review of scientific information and input from waterfowl hunters and are intended to provide the most opportunity for hunters while protecting waterfowl resources.

“Illinois is a large and diverse state that is 400 miles long from north to south and is home to waterfowl hunters with diverse opinions who pursue many different species of waterfowl in different habitats using a variety of methods,” said Randy Smith, program manager for IDNR wetland wildlife.

“Selected regulations may not represent exactly what individual hunters or groups of hunters prefer, but hopefully offer some opportunity for all hunters and hunting styles.”

USFWS regulations require states to establish zone lines for a five-year time period, and the USFWS establishes the frameworks within which states must select their regulations.

Illinois’ dates for the upcoming 2020-21 waterfowl seasons, established in 2015, can be found on the IDNR website at https://www2.illinois.gov/dnr/hunting/waterfowl/Documents/WaterfowlZones....

For the 2021-2025 seasons in Illinois, waterfowl hunting zone lines have not changed from previous years.

In reviewing biological data including waterfowl abundance and hunter harvest, as well as preferences expressed in hunter surveys, IDNR opted to make no changes to zone boundaries.

More than 88 percent of hunters surveyed indicated the county they hunted most was in the correct waterfowl zone, and hunter attitudes regarding two proposed zone line changes were divided.

IDNR also did not adopt the use of a split season due to USFWS frameworks that would require Illinois to reduce the number of zones used from four to three.

Later dates to begin duck and goose hunting seasons in Illinois were adopted for 2021-2025.

Hunter surveys showed that later dates were preferred in each zone.

Those preferences were balanced with biological data to avoid mismatches of season timing and peak waterfowl abundance, average freeze up dates, or conflicts with other hunting seasons such as the first firearm deer season.

In general, season dates are similar to those used in previous years, but trend later, such as the opening date in 2023 in the Central Zone of Oct. 28 rather than Oct. 21.