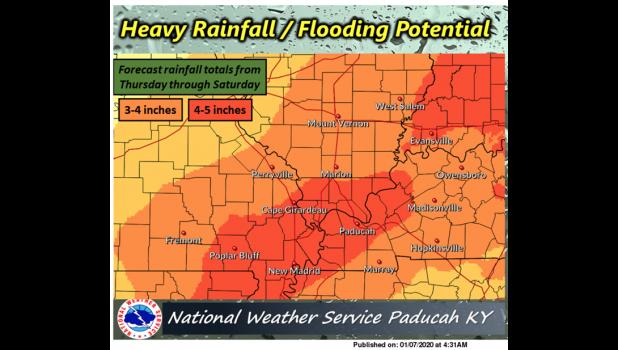 Thu, 01/09/2020 - 10:43am admin
As of Monday afternoon, Jan. 6, the weather service was saying that “the heaviest rainfall and greatest impact is expected from Friday night into Saturday.”

Heavy rainfall, flooding and strong winds could be concerns for Southern Illinois, including Union County, Southeast Missouri and Western Kentucky as the week comes to an end.

The National Weather Service office in Paducah was reporting early this week that confidence remained rather high for heavy rainfall, with a minimum of 3 inches, to as much as 5 inches or more across parts of the region from today through Saturday.

Union County is included in the area which could see from 4 to 5 inches of rain.

As of Monday afternoon, Jan. 6, the weather service was saying that “the heaviest rainfall and greatest impact is expected from Friday night into Saturday.”

“Nearly saturated ground conditions are already in place ahead of this upcoming rain system,” the weather service said.

“Therefore, flooding issues are likely to develop rather quickly.

“Flooding of low-lying and poorly drained areas, as well as low water crossings, can be expected. Where the heaviest rains occur, more significant flooding problems may develop.”

The weather service noted that water levels already were high on the Ohio River and some of its tributaries. Additional rainfall could lead to delayed crests or even higher crest levels.

In addition, the weather service advised, new river flooding may be possible throughout the area due to heavy rain.

“Individuals, businesses and governmental agencies with interests in or near flood prone areas should review their preparedness plans for potential flooding later this week,” the weather service advised.

Here’s a look at the forecast for the Union County area which was posted Tuesday, Jan. 7, on the weather service’s website:

Thursday, today: Showers, mainly after noon. Cloudy, with a high near 55. South wind, 15 to 18 miles per hour, with gusts as high as 32 mph. Chance of precipitation is 60 percent.

Thursday night: Showers, with thunderstorms also possible after midnight. Low around 51. South wind, 14 to 16 mph, with gusts as high as 31 mph. Chance of precipitation is 100 percent.

Friday: Showers and possibly a thunderstorm. High near 63. South wind, 13 to 16 mph, with gusts as high as 30 mph. Chance of precipitation is 90 percent.

Friday night: Showers and possibly a thunderstorm. Some of the storms could produce heavy rainfall. Cloudy, with a low around 50. South/southeast wind, 10 to 16 mph, becoming north/northeast after midnight. Winds could gust as high as 31 mph.

Saturday night: A chance of showers before midnight. Mostly cloudy, with a low around 32. West/northwest wind, 8 to 11 mph with gusts as high as 28 mph.